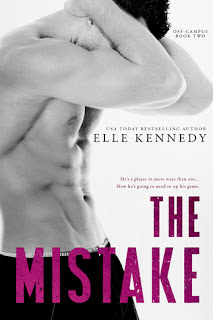 His heart hammers against my breasts, and I feel almost smug, because I did this to him. I made him curse and groan and wobble as if the world beneath his feet had vanished. I made him come apart.

And he did the same damn thing to me.

I always feel kinda bad for those sequels whose predecessors simply blew readers out of the water. That often equates to having a hell of a lot to live up to, because let's face it: at the very least, a sequel wants to be as good as the book that came before it, or else what would be the point? It sure as hell wouldn't want to bring the series down. So, yes, The Mistake had astronomically high standards that it had to meet and you know what? It did exactly that, what with bestselling author Elle Kennedy bringing readers the story of a college junior known for his prowess on the ice and off it when it came to the opposite sex and the college freshman who knocks his world off balance before proceeding to right it. John Logan finally gets his story told and it's one that I never expected, and his having Grace Ivers as his co-star made them an unlikely but somehow perfect pair. Grace may have been a freshman at the beginning of the story, but this girl was no pushover, while Logan proved it's never too late to make amends when it's backed by sincerity.

You know how mistakes only look like mistakes at the beginning but later turn out to be the best thing that ever happened to someone? This is the realization that Logan and Grace come to in this romantic comedy that had me grinning like an idiot until my cheeks ached. There's nothing stereotypical about these two or their love story, and I'm realizing with each new book I read in the Off-Campus series that that's what's so darn endearing about these books. There's a hell of a lot more going on than Logan trying to prove to Grace that he wants a second chance at being with her, and not just as an occasional hook-up. I love that Grace isn't some simpering, shy violet who is simply waiting for Logan to sweep her off her feet. She wants him to earn her trust and affections and rightfully so. A heroine who just drops everything for some guy isn't worth looking up to or emulating, and Grace may be young, but she's neither desperate nor needy. And Logan had my heart breaking for him because of the choices that he felt he had to make for his family.

Do I think The Mistake surpassed the heights that The Deal reached? To be honest, no, but it's right up there with its predecessor, bringing that mix of humor, heart, and heat and proving that there's always more to someone's story than meets the eye. Even with all the romance and sex between Logan and Grace, there are underlying home life struggles bearing down on Logan. Graduating from college and earning one's degree is supposed to give you that feeling of hope because you're taking that next step toward the future that you've been dreaming of. Sadly, that's not how it works out for everyone, but the choice is always up to us--do we choose what's best for ourselves, or do we go with what's best for everyone else? If we put our dreams on hold, will they still be there when we're ready to go from "pause" to "play" once again? This sequel is about much more than hockey and falling in love--it's also about the love we have for family and the lengths we go to for those we love most. The Mistake is a definite five-plus-starred success. ♥