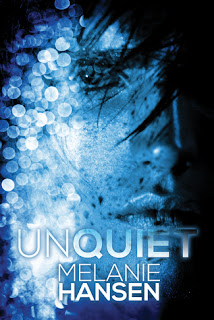 Gah! You made me cry, Melanie Hansen! The Resilient Love series has already given us two books that shared exactly what it meant to--a love so resilient that it defies expectation and whatever limitations may be set upon it by people--but with this third and final novel, Melanie Hansen went way, way, WAY above and beyond what I was expecting and came up with a story that lets us know that while love is resilient, it often takes more than love to make any relationship last. You know that oft-used thing people tell those they're in a relationship: "Loving you is easy"? Well, in the case of Eliot Donovan and Loren Smith, loving comes with a set of challenges that would test the mettle of any human being. Add to that the knowledge that what Eliot suffers from is a lifelong thing and you can only imagine what kind of person you would have to be to make the choice--and yes, it is a choice--to be with someone who cannot always control what they do or what they say. Eliot and Loren have loved each other for years, but can they continue to do so?

This was such an emotional read, one that I was already expecting to be heavy and angst-ridden because of the heavy subject matter, but wow, what both Eliot and Loren had to go through from the beginning 'til the end of the book, had me grabbing a couple of tissues. Like I said earlier, there's nothing easy about what they want and that's a relationship. Not a temporary one, mind you. Eliot and Loren have shared a connection to one another since they were children, and even after they were forced to part ways because of Eliot's suicide attempt when they were both seventeen and didn't see each other for nine years, one look at one another again and it was as if the nearly decade long separation never existed. But the thing is, the separation did happen, and what was considered as Eliot being weird or crazy when they were kids and teens was merely an inkling of what he was actually going through and now diagnosed as being bipolar, Eliot's needs aren't as easily met as you would think, a realization that Loren encounters rather belatedly.

Making the choice to be with someone who has any sort of mental illness or even a physical condition is one that you don't come upon easily. Even after you make the conscious decision to be with them, life together can be trying and I'm sure that many have chosen to walk away. If anything, it takes a special kind of love and devotion for you to be in a relationship with someone whose needs and wants can often supersede your own. I think that Unquiet presses upon readers how strong love can be, but that it isn't always enough. You need patience, understanding, and a whole slew of other elements simply to get through each day. But is it worth it? Eliot and Loren's love story shows that it is and, at the very least, it can be, if we want it badly enough. This was such an awe-inspiring end to this series, but one that I more than appreciate. I read all three books back-to-back-to-back, and I have become a fan of Melanie Hansen's because of Resilient Love. She truly has a gift and I'm grateful she shares it. Five-plus stars for Unquiet. ♥