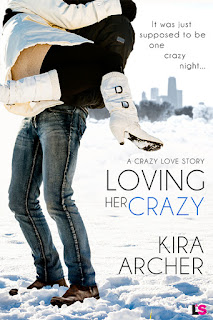 She drew a hand down his chest, tugging a bit on his shirt. "Even if we never speak again, I know I won't ever forget you. You've changed some part of me, too. I walk around with a cynical little shell around my heart. No one's ever cracked it before."

"And I have?" he asked, trying to be lighthearted, though she was tearing him apart inside.

She shook her head. "You've shattered it, I think."

Kira Archer was one of those authors I happily discovered last year. I read and enjoyed the first two books in her Crazy Love series--Driving Her Crazy and Kissing Her Crazy--which were about one set of siblings falling in love with another set of siblings. Reading her third and presumably final book in the series, Loving Her Crazy, was a no-brainer, but this series ender surpassed whatever expectations I had going on. Iris Clayton and Nash Wallace's love story was zany and out-of-this-world and officially becomes my first squee-worthy read of the year. It was cute and crazy and the kind of contemporary romance that inspires you to take a chance because, more often than not, that one risk could turn out to be a life-altering event.

Iris is a city-bred nurse from North Carolina while Nash is a cowboy from the plains of Montana. They meet on an airplane bound for nowhere after all flights are grounded due to a snowstorm in Chicago. Out of curiosity and with hours to go before their re-scheduled flight to Miami the following day, Iris and Nash go on an impromptu adventure around Chicago, and along the way, that initial connection between them becomes something much more significant. Now, I'm not saying that there was any insta-love or even insta-lust going on. Yes, Iris and Nash notice each other's physical attributes, but they didn't spend those first moments wondering how they could get into one another's pants while they wait out the snowstorm.

I love how this book highlights the infinite possibilities that love can find its way into our lives because even though our two main characters weren't looking for it, it made its way to them. A lot of what happens isn't planned and Iris and Nash take things as they come. Their time together is limited but they choose to make the most of it, as it should be in anything we do. As I was reading the book, I could already envision the story in my head. This would make such a fun romantic comedy movie, whether on the big or small screen, to watch. There were parts of both Nash and Iris that I could so relate to, and they were just so darn likable that it was difficult to find anything negative to say. Loving Her Crazy receives five-plus stars. ♥