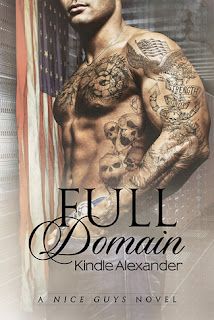 He didn’t know when it had happened. Despite his best efforts to avoid it—to keep it purely physical and temporary—he’d let Kreed in and there was no denying that to himself any longer.

Don't you just hate it when you finally discover a series that you love only to have it end the same day you start it? Yep, that's what happened with Kindle Alexander's Nice Guys series. I read the three books one after the other, and when I got the end of Full Domain and found out it was the series ender, I was heartbroken...though the author assures fans of the series that the characters will be showing up in future works. See, that's the thing with these nice guys, who all have a naughty side that we can't get enough of--you end up becoming attached to them, what with all that cheering toward their respective happily-ever-afters going on. But as sad as I am to see the series end, I must say that it ended on a high note with Kreed Sinacola and Aaron Stuart's love story and the resolution to the addictive and mystifying three-book arc.

Our introduction to thirty-eight-year-old Kreed Sinacola, a former Navy SEAL and currently a Deputy US Marshal, in the second book, Full Disclosure, included a heartrending moment that had him learning the untimely death of his younger brother Derek. Then there's the time when he "meets" his partner's IT savant, Aaron Stuart, who is twenty-nine and works for the NSA, and Kreed gets shot down via Skype. Aaron is such a revelation in this book and certainly nothing like I expected him to be when he made his appearance in book two. There's no denying his genius when it comes to computers, computer technology, and the internet; but he's also an enigma of sorts, with his ever-changing hair and eye color, that piques Kreed's curiosity. Plus he's keeping two vital secrets, not just from Kreed, but everyone else in the series.

Kreed and Aaron are left with no other choice but to work together in order to finally bring down those behind the series of gay-related hate crimes. The attraction is there and even when Aaron tries to deny its existence, the pull is often to strong to resist. Kreed seems to enjoy poking Aaron (and no, you dirty-minded people, I'm not talking about THAT kind of poking...not yet anyway) in order to get a reaction out of him--a reaction that isn't fake. There's snark and sass, but there's also flirting and innuendo, and all of that combined makes for what I would consider sizzling foreplay between these two. There's a nine-year age difference that's there but it never really comes into play, and I think that highlights how age isn't really a factor when two people are connected in more ways than one. Yep, these two were swoon-worthy.

There's quite a bit that goes on in this series ender, but all loose ends from the previous two novels are cleared up, and I'm not just talking about the story arc that runs through the entire series. There's also a full circle (pun not really intended but let's go with it) moment that happens, one that had me grinning from ear to ear as it hearkens to events in the first book, Double Full. With the intrigue factor amped up but not overwhelmingly so, book three is still every bit the M/M romance novel that it sets out to be. To have all three couples here and to have them share important milestones as well simply felt right. I wouldn't hesitate to recommend the Nice Guys series for those who want more than hot M/M sex (though there's lots of that too). Full Domain puts a five-plus-starred exclamation point on a 2016 favorite series. ♥