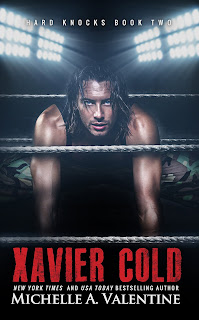 The story of Xavier Cold and Anna Cortez continues in the second part of the Hard Knocks duet, Xavier Cold, from bestselling author Michelle A. Valentine, and it picks up a few hours after the cliffhanger ending in Phenomenal X. After Xavier's anger gets the better of him and allows his personal issues with one particular jerk of a fellow wrestler interfere with his professional life, he's put under suspension by his boss. This leaves Xavier in a holding pattern that will lead him into making certain decisions that could spell the end, of not just the better life he's created for himself, but his own relationship with Anna. As much as these two love each other, we must keep in mind that they haven't really known one another for very long, and Xavier's past will come back in full force and wreak havoc on their already tenuous present.

Okay, I'm just going to say it. Xavier and Anna needed one heck of a crash course in open communication. Had they learned to actually be honest and out there about whatever was going on inside their heads, then maybe they wouldn't have made as many insanely ill-thought choices throughout the story. The fact that they tried to justify those choices by saying they were doing what was best for the other person made me want to smack these two, increasing in force with each terrible error in judgment they would make. Anna's jealousy was a clear indication of just how little she trusted the man she claimed to love and would never leave...only to have her actually leave him. Eh? And seriously, avoiding phone calls is a really rather immature thing to do and made Xavier come as more cowardly than someone wanting to save his woman.

Now, all that being said, I actually liked the overall. Yes, it had more angst and melodrama than its predecessor, but what I liked most was finally learning more about Xavier and why he is the way he is. My heart broke for him every time memories of his childhood would come back through his nightmares. Then there was what he did to survive as a teenager simply because it was much easier to rely upon the supposed kindness of a stranger than actual family. And once again, Xavier Cold is the main reason I enjoyed this sequel and the entire duet. He's multi-layered and very complex. He makes it clear that he isn't the poster boy for all things nice and shiny, but that belies the kind of man that he is on the inside. I'm going to recommend that you read Phenomenal X before heading into Xavier Cold, which gets four stars. ♥

Learn more about Michelle A. Valentine.