Review: Into the Fire by E.L. Todd (Gorgeous Entourage #1) 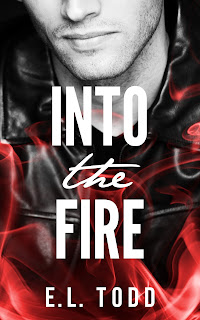 Into the Fire is the first book in the Gorgeous Entourage series by E.L. Todd. This is the second book by the author that I've been able to read and review, the first being another series starter, Only for You, back in November 2013. Since then, E.L. Todd has gone on to spawn quite a number of books, making her into a prolific writer in such a short amount of time. It's difficult to keep up with all of them, but since Into the Fire was the beginning of a new series, I felt it was a good way to get back into the author's writing and see how far she's come since she first got in touch with me on Goodreads to read her book. And I must say, I'm happy to see how she's put together a story that was lighthearted but still packed a pretty good punch in terms of heat and character-driven angst.

Ash is a thirty-year-old tattoo artist who wants to open his own shop, and when his loan application is denied, he decides it's time for his parents to pay back the loan he lent them before he went into the military. They're more than willing to do it...but only if he has a girlfriend. Since he's never been in an actual relationship before and refuses to enter one now simply to break up with her after he gets his money back, his best alternative is to get an escort. This is where Alessandra comes in. She works for Beautiful Entourage, an escort service that abides by strict rules that limit the physical contact the clients have with their escorts. What begins as a business arrangement soon turns into quite a comfortable and open friendship with lots of mutual attraction.

Okay, Ash was as cocksure as a guy could possibly get and I was tempted to smack him for being crude a time or two (or three), but as the story went on, I actually found myself liking him. Talking dirty is second nature to him and he certainly makes no apologies for who he is and what he's done in his life, and that's part of what makes him someone worth liking. He's honest with Alessandra and their unlikely friendship allows her to feel comfortable with him in a way that she was probably never before in her past relationship. They have inappropriate conversations that highlight how at ease they are in each other's company. I quite enjoyed their banter and the story as a whole.

Gorgeous Entourage is a spin-off of Beautiful Entourage but you don't need to have read the latter to fully get what happens her. Into the Fire gets four stars! ♥

Pre-order Into the Fire on Amazon | B&N | Kobo.