Review: Worth the Trade by Kristina Mathews (More Than a Game #2) 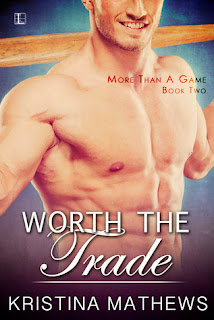 Worth the Trade is the second book in author Kristina Mathews's More Than a Game series about the fictional San Francisco Goliaths baseball team. This sequel was about the newest player to be acquired by the Goliaths, left fielder Marco Santiago, and one of the team's owners, Hunter Collins, who inherited her late father's shares. It is Hunter who initiates the trade that brings Marco to the Goliaths, believing that his addition to the team will help them earn a place in the post-season. From the time she picks him at the airport, they're both aware of the other, the attraction clear as day, no matter how much they try to pretend it doesn't exist. After all, a player getting involved with a team owner isn't exactly a good idea, but lust and, later on, love can often override logic and common sense. Add to the whole taboo relationship Marco's feelings of inadequacy when it comes to being the newbie yet again on another baseball team and Hunter's need to prove she's not just as good but better than her colleagues and you've got conflict galore.

This second in a series had an intriguing premise, although the chemistry between Marco and Hunter took a while for me to get on board with. For someone who's been part of the team's management, albeit most of that time was spent behind the scenes, Hunter's sudden desire to pursue anything personal with her newest player was highly unprofessional and unethical. Yes, I'm all for falling in love and making certain sacrifices for that love, but that's not where they were at when this whole thing started, and I would have expected more from someone who's in charge of an professional sports organization. But yeah, I get it--love can often lead to us making irrational decisions, and Hunter and Marco were pretty good main characters, so it wasn't too difficult to want to root for the two of them to get their happily ever after. I do wish, though, that these characters in the series learned to communicate better, because it seems a lack of open dialogue is where they often stumble and falter. Worth the Trade receives 3.5 out of five four stars. ♥

Purchase Worth the Trade on Amazon | B&N | Kobo.