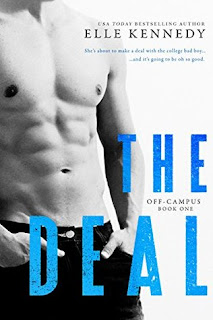 I narrow my eyes. "So my favorite color is black, huh? What makes you think that?"

"Because every frickin' shirt you own is black." She shoots a pointed look at my sweater.

"Maybe that's because black goes with everything--did you ever think about that?" I smirk. "Doesn't mean it's my favorite color."

Holy hockey romance series starters, bookaholics! What the hell was I thinking to wait this long to read bestselling author Elle Kennedy's much talked about Off-Campus series?! When the first two books went on sale prior to the recent release of the latest book this month, I finally bit the puck, erm, bullet and bought them and thank goodness I did. Now I don't feel like the only reader on the planet who hasn't heard about Garrett Graham and Hannah Wells and the rest of the Off-Campus gang, and what an introduction to this crazy bunch of hockey playing college students, the girls who make them quit their manwhorish ways, and the supportive yet kooky motley crew of friends they surround themselves with I got by way of the first book, The Deal. I was hooked from the get-go and had a perma-grin on my face from book one to book three--all of which I read back to back to back this weekend. If book four were already available, I would have made it four in a row, but that'll have to wait until later this year, I surmise.

Hannah has often gone for a certain type of guy, but none of the very few boys she's dated and been with have helped her attain an orgasm. Now, she's got her eye on a football jock, but she doesn't think she appeals to him as much as he does to her. Help comes in the form of hockey team captain Garrett, but it's more of an exchange deal because he needs her help to keep his GPA up if he has any hopes of continuing to play. They make assumptions about each other, and I loved how these two were able to disproved whatever stereotypical ideas the other had going on and not having to make an actual conscious effort to do so. Hannah and Garrett simply were the people they were, and goodness, were these two absolutely and extraordinarily great individuals, even with the respective dark episodes in their pasts. I wouldn't call either one of them irreparably broken because while they've both gone through their own share of pain, they survived and chosen to lead the lives that they want, refusing to cower in fear or live with uncertainty.

One of the most significant things about this particular sports romance is the honest-to-goodness friendship the main characters had. There were no pretenses with these two--what you saw was what you got. The bickering and banter--which would switch between utterly childish and delightfully devious--had me snickering, and I would give you a total number but I lost count. Yes, I've read new adult (NA) hockey romances before, but this one just felt so...unique. There was unapologetic flirting and fucking going on, but then neither Hannah nor Garrett hesitated to call each other on their bullshit. I actually liked that she would call him "dude" (I can so relate) and that he would call her "dumbass" when she was acting like, well, a dumbass. She gave as good as she got and vice-versa, and I like when characters do that, almost as if you've reached that comfort zone reserved for really good buddies. From the witty dialogue to a rom-com story that also tackled serious issues, and a fab cast of characters, The Deal is a five-plus-starred real deal. ♥