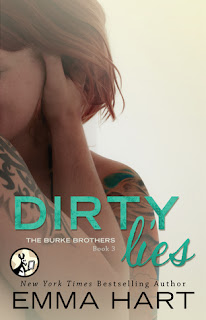 Being the bookaholic that I am, I'm more than familiar with the story line that involves a fabricated romance. Those are already complicated from the get-go (such is the case when it comes to deception), but when actual feelings and emotions come into play and the lie begins to feel more like the truth, then "complicated" isn't apt enough a term for it. After all, is the shift from fake to real only on one side of the equation or is the same for both? That's only one of the dilemmas that Aidan Burke, one-half of the middle twin tandem in the Burke brood and drummer in Dirty B, faces when he and tattooed barista Jessie Law strike a deal to be in a fake relationship in Dirty Lies, book three in Burke Brothers by Emma Hart. He needs to clean up his image and be more of a good guy who can settle down with  girl instead of the bad buy heartbreaker that he and his three brothers have long had a reputation of being, and she needs her cheating ex-boyfriend to leave her alone since she's not all that interested in rekindling their relationship.

This had an enemies to lovers feel to it, although the whole hating thing was only coming from Jessie, and to be perfectly honest, I never really understood why she disliked Aidan as much as she did. Yeah, she mentioned something about balls being thrown by Aidan and his brothers, but it was never clear if it was done out of young boys being idiots or if it was intentional bullying, which I doubt because Jessie never seemed to have an issue with the three other Burke boys. But other than that one niggling minor issue, I actually liked the story, especially since it did focus upon the treatment that significant others receive from the overly zealous fanatics of celebrities and stars. Aidan needed to be a bit more proactive when it came to his feelings for Jessie instead of reactive, but he was still a good guy overall. Jessie was spunky and self-assured and I laughed at the irony of her being disgusted about her younger sister's Dirty B fangirl-like obsession but ended up falling for one of Dirty B's members anyway. Dirty Lies was a good four-star read. ♥