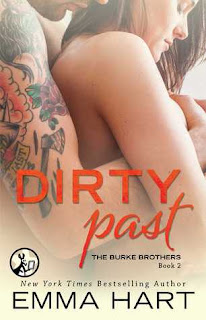 From the youngest brother, we move to the eldest in the foursome that makes up Dirty B, the hottest "boy" band around (though I usually reserve the term "boy band" for all-male groups composed of non-musical instrument-playing members). Emma Hart continues with her Burke Brothers books with Dirty Past, the second in the series, and this time around we have Tate Burke, who, at twenty-five is the oldest brother and the one who seems to make a habit of finding a woman, having sex with her, and then tossing her out of whatever hotel room he's in. He's cocky and can be somewhat of an ass, but he finds himself stumped when he meets his new personal assistant--Manhattan-bred and Harvard-educated Ella Dawson. She seems shy and unsure but she's got sass and puts Tate in his place. He's intrigued by her, but when he learns about her abusive past, she inspires a far more protective side in Tate, and while Ella may wish she could simply leave it all behind, she'll be forced to confront it and finally stand up for herself and for Tate.

I'm a bit torn when it comes to this second in the series. For most of the book, I loved the story and both Tate and Ella. Yes, Tate could have been the spokemodel for manwhores everywhere, but there was never any doubt how much he loved his family, especially his niece Mila--who once again stole the show. Then there was Ella, whose determination to start a new life, away from the trappings of her privileged but stifling life in New York, was inspiring. The story was going so darn well, and then we get close to the end...and BAM! Major disheartening moment. I won't go into details since I don't want to spoil the book for anyone who hasn't read it, but suffice it to say that what happened felt like such a disservice to victims of abuse. And that's why I'm now torn. Overall, the story was really good and Tate and Ella are my favorite Burke Brothers couple, but was that one disappointment enough to sway my rating? Unfortunately, yes, it was. So, instead of giving Dirty Past the 4.5 stars it had going for it, I have to knock it down to three stars. ♥