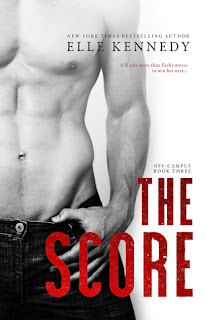 Dean's shoulders set in a severe line. "Why?"

"Because I said so."

"Bullshit," he says again. "You can't just call it off without giving me a good reason."

A powerless feeling rises in my throat, because I don't have a good reason.

Elle Kennedy performed one hell of a hat trick with her bestselling Off-Campus series because after the success that sparked the fan following for The Deal and The Mistake, The Score proved that none of it was a fluke. Three books, each one different but the overriding theme of love and friendship among all the recurring characters as well as the pair whose love story gets told in the midst of the trials and tribulations that face them is what shines brightest. And if you think you know all about Dean Di Laurentis and his perceived manslutting ways from how he was portrayed in the first two books, then you're in for a surprise because while those books skimmed the surface (and let's face it, Dean is a bit *cough, bullshit, cough* of a manwhore), there's depth to the guy who looks as if the only things he takes serious are partying, getting laid, and hockey, in that order. It appears that not even his closest friends realize just how much depth there is to Dean, but he becomes the best version of himself when he falls for "G's GF's BFF," Allie Hayes.

Dean Heyward-Di Laurentis makes no apologies for who he is and what he does. His life is set and he doesn't have too many things to worry about. The Life of Dean is as it should be, but when he unexpectedly ends up sleeping with his best friend's girlfriend's best friend, Allie Hayes, life as he knows it takes a far more interesting turn. You see, Dean isn't as one-dimensional as he'd like you to think. Behind the cocky attitude and playboy slash rich boy image is a guy who's loyal to his friends, loves his family, and discovers that he's got a soft spot for the girl who makes him think she's had enough of him--Allie. These two were hilarious together, with neither one backing down from each other or the challenges that their being together brought. When they were together, they struck that perfect balance, with Allie serving as a compass of sorts for Dean. No, he wasn't necessarily lost, but he was walking down one path that he believed he had no need to veer away from, only to see that he could follow the path of his own choosing.

I laughed a lot reading this book but there's a point in the story that led to a few tears for several pages. It was a moment that was so out of the blue that I had to take a minute and re-read it because I thought there must have been some sort of mistake. And see, that's become a signature of sorts in this series. You're lulled by the lightheartedness, and then the reminder that there are serious, life-altering events for the characters makes it presence known. Just like in real life, decisions have to be made and those decisions can either make or break you. We see Dean in a whole new light in this book and while Garrett will always be my favorite, Dean is the one I wanted to pick back up when he stumbled and give a reassuring hug to. He's such a heartrendingly endearing hero, one who refused to take the easy way out. Then there's Allie, who is every bit the strong-willed and loving heroine that lives up to the legacy set by the two before her. The Score scores five-plus stars, and that ending has me eagerly awaiting John Tucker's story in The Goal. ♥