Book Spotlight: Break Me Like a Promise by Aria Grace & Kyan Christopher 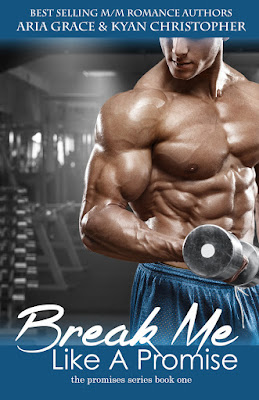 About Break Me Like a Promise
An M/M and M/F Contemporary Romance Series. Written from the perspectives of both male and female, gay and straight characters.

For brothers Brent and Tad, opening up their gym, Sculpt, is a dream come true. Struggling to gain recognition in the fitness world, they enlist the help of a well-known advertising agency to help market their full service fitness center. When Brent meets his new account manager, he feels an automatic attraction to Luke. However, another employee in the gym has his eyes set on Brent and will stop at nothing to keep the boss to himself.

Tad is married to his high school sweetheart. With a wife and two adorable children, his life couldn’t get any better. Then his happily ever after is cut short by a tragic accident. Tad gives up on love, expecting to never be happy again, until one of his employees puts her life on the line to protect his business.

Read my four-starred review of Break Me Like a Promise. 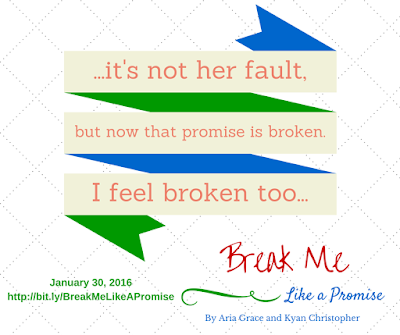 An Excerpt from Break Me Like a Promise
As soon as our orders are placed at Blue Wok, Brent leans back in his chair and heaves out a deep breath.
“So do you want to talk about it?” I ask again, taking a sip of my Coke.

“No.” He laughs quietly. “Actually, I don't. I'm done talking about it. Thinking about it. I just need to get away from it for a little while. Tell me about yourself. How's work on our campaign coming?”

Brent visibly perks up at the topic.

“Actually,” I say, getting a little excited myself, “it's going really well. I have some mock-ups for you guys to approve for the ad I want to run. And we have two tentative dates in mind for the cross promotion with Tangled down the street.”

“Really? The pretzel place? That's awesome,” he says, smiling for the first time that I've seen since his sister-in-law's death. “I can't wait to check it out. I know the timing really sucks and I'm sorry about that. Obviously, we had no idea Tad and I would both be so disconnected from work for a little while when we hired your agency.”

“No. No, not at all,” I say, waving my hands in front of me. “You hired me to take care of this stuff for you. So really, whether you are working or on vacation, this stuff will happen. The campaigns will run, business will boom, and all will be great.”

Brent laughs at the simplicity of my words. “From your lips to…well, you know.”

“So what else is going on with you? Do you live alone? Have a dog? Play sports?” Brent is clearly grasping at topics of conversation.

Brent furrows his eyebrows. “Wait. Now I don't even remember what I asked or in what order.”

“Yes, I live alone. I've got an apartment nearby. No, I don't have a dog or any pets. I like dogs, and maybe someday, but my apartment is too small for a big dog, and I wouldn't want a little yapping thing. And what was the last question?” Now I can’t remember what he asked.

Brent makes a face and scratches his nose in an adorable way. “Sports. Sports. I asked about sports.”

“Oh, right. Not really. I used to play hockey when—”

“Yeah. Some friends and I play pickup now and then, but it's actually been a while. I’m not great at it but I have fun. Once the weather clears up, they might drag me out there again.”

“What about you?” I ask, twisting the straw wrapper into a tight rope to keep my fingers busy.

Brent shrugs. “Not much anymore either. I used to play softball with some buddies, and baseball when I was younger, but since we opened the gym, I mostly just work out there.”

“Yeah, I can tell,” I say under my breath before I catch myself.

Brent smirks. “Can you?”

Shit, now he thinks I’m flirting. That's not a bad thing, but he is still my client, and he's definitely too vulnerable right now for me to take advantage of him.

“Well,” I choke out, “it's obvious you and your brother both spend a lot of time testing out the equipment in your gym.”

Brent squints a little as he seems to study me. “Is there anybody special in your life?” he asks, cutting right to the chase. “Maybe a girlfriend waiting for a ring?”

Now he’s playing with me. He knows damn well there’s no girlfriend, unless he has the worst gaydar known to man. “Nope, no girlfriend. Not since fourth grade.”

I look right at him. “Nah, nobody serious at the moment. What about you?”

Brent shakes his head without breaking his stare. “No, my life's too crazy for a boyfriend.” He winks. “But I definitely like friends who are boys.” 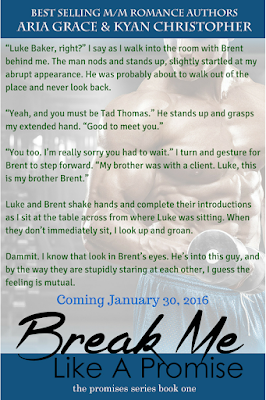 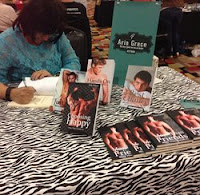 Born and raised in beautiful California, Aria enjoys the year round sunshine and laid back environment of the west coast. Her career started out in tech writing and web development and has evolved into all things marketing with fingers in everything related to book publishing.

She lives with her husband and two children and more pets than she can keep track of. Despite her crazy schedule, she loves the time she carves out to read and write. Whether it's on the beach or on the couch at 2am, she is a woman obsessed!

She loves to hear from readers so please feel free to drop her a note or visit her at www.ariagracebooks.com. 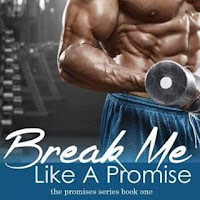 Kyan Christopher was born and raised in Louisiana. A southern boy who loves the city, he is a romantic at heart. Never thinking he would become an author, a fan fiction piece he wrote inspired a series that launched his desire to weave tales of passion and romance. Kyan is supported by his loving husband of 16 years. They live in the South with their three four-legged kids.