Review: Catch Me When I Fall by A.L. Jackson (Falling Stars #2) 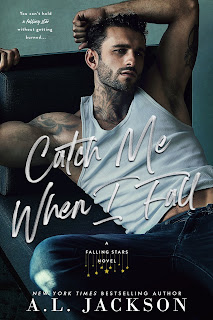 I leaned down, my lips a whisper against his. “And I want to sing for you.”

I'd originally listened to Catch Me When I Fall when it was released as an Audible Original back in February and was taken by the beautiful, heartrending story penned by A.L. Jackson and brought to life by Virginia Rose and Jason Clarke. I got to re-experience this tale of love and vengeance in its eBook form, and goodness, but how my heart got yet another workout. Yes, I may have already known what was going to happen, but that didn't lessen nor tamp down my emotions while reading this book. It's a rarefied few that can do that, but then this is A.L. Jackson we're talking about here, and she's an author who has repaid my faith in her writing and the time I put in while reading or listening to her work with the kind of stories that really get to me and remind about the power of love.

Catch Me When I Fall is the story of Royce Riley, a record executive at Milton Records, and Emily Ramsey, a songwriter and the lead singer for Carolina George. I've been trying to figure out a way to write this review without giving anything away in terms of the story line, and ugh, easier said than done. Basically, Royce being the Head of A&R for Milton Records is tasked to get up-and-coming country rock band Carolina George to sign with his stepfather's record company. He hates both the company and the man behind it, but has reasons for working there. He's waited for his plans to come to fruition, but the pieces are falling into place. He certainly doesn't need a distraction in the form of Emily, yet he can't seem to resist the draw to this beautiful yet broken woman with a voice that calls to him. When all is said and done, will Royce and Emily's love survive or become collateral damage?

This gave me the angst that I crave but doesn't overdo it. Yes, there's drama, but there's also a whole lot more than that, with a love story that was never part of either of the main characters' plans. Both Royce and Emily were independent, strong-willed individuals who had secrets that they kept close to their vests. Their love for others came before anything and everything else, but that love and loyalty also came at a personal cost to both of them. These two went through the wringer, and my heart broke for them; yet, inasmuch as there was heartbreak, there was also hope and a hard fought happily-ever-after. I'm highly recommending Catch Me When I Fall. Five-plus stars. ♥
-------------------------
Read my reviews for the Falling Stars series:

Purchase Catch Me When I Fall on Amazon.