Review: Confessions of a Naughty Nanny by Piper Rayne (The Baileys #6) 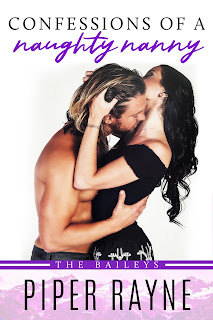 Is it possible to be as in love with one fictional family as I am with the Baileys of Lake Starlight, Alaska? I swear, with each new book that the writing duo of Piper Rayne releases, the more I adore these nine siblings. Grandma Dori, and people who become part of their lives. We're now into the sixth novel--but seventh release since there's a novella, Operation Bailey Wedding, between novels three and four--and this one features the youngest among the Bailey siblings, twenty-two-year-old Phoenix. When we first met her in Lessons from a One-Night Stand, she was a seventeen-year-old who had one dream: to be a singer. She didn't follow the same path as her twin, Sedona, choosing instead to head to California rather than pursue a college degree. But she returns to their hometown after failing to be noticed the way she'd hoped. She jumps from job to job and is relegated to living with her siblings. When thirty-three-year-old music producer Griffin Thorne decides to move to Lake Starlight with his ten-year-old son, Maverick, and is searching for a nanny, Phoenix knows this could be her chance to get her foot into the music recording industry. What she doesn't realize is that Griffin is no longer a producer or that there was a possibility of her falling for the man and his son. When everything comes to light, will Phoenix give up her dream?

There was so much to love about this book! Yes, the whole naughty nanny and randy daddy (totally came up with that second label) was part of the story line, but everything else that Piper and Rayne had as part of Phoenix and Griffin's romance took me by varying degrees of surprise, which I naturally loved. With the bits and pieces readers got of Phoenix in the previous books showcased a streak that could be easily tagged as rebellious, but I prefer to think of her as someone who had dream and was solely focused on that. She did a whole lot of growing up in this book, which was a great thing because she did seem rather lost after not achieving the level of success she'd hoped for in California. She needed someone like Griffin in her life, but she also needed Maverick, too, and vice-versa on both counts. Naturally, this wouldn't be a Baileys novel if it didn't have the whole clan present and accounted for. Sure, they can be a wee bit--cough, A WHOLE LOT, cough--nosy and give their unsolicited advice and opinions, but that's only because they're protective and care about each other. Of course, there's the incomparable Grandma Dori, who actually seems to have a better track record when it comes to matchmaking than Juno, but more on her when her own book is released in June. For now, go read Confessions of a Naughty Nanny. Five stars! ♥