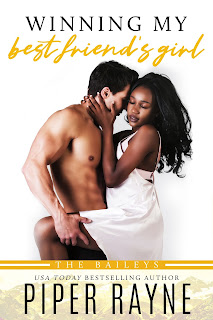 I have been eagerly awaiting Kingston Bailey's story for what feels like forever, and a lot of that has to do with the fact that he's probably the Bailey readers know the least about, followed by Sedona, whose own story comes after King's. The basics when it comes to twenty-five-year-old King is that he's a firefighter and smoke jumper and unlike most of his siblings, he lives in Anchorage, not Lake Starlight. He also had a mad crush for years on Stella Harrison growing--the same Stella who ended up dating his best friend, Owen, in high school. Years have passed since his friendships with both of them ended abruptly, but now, Stella's back, and it looks like history is repeating itself. No, she and Owen were done years ago, but it turns out that Stella is the woman Owen's closest friend and fellow firefighter, Lou, believes is his "the one".

Ah, King... The guy was a revelation! It's always the quiet ones who end up surprising you the most. For the record, it's not like he was pining away, doing nothing but waiting for Stella to return. His life wasn't on pause and he was with other women, so good for him, and the same goes for Stella. They did their own thing, becoming  I'm not the sort of reader that expects main characters who go their separate ways to be celibate until fate or circumstance brings them back together. That's just not realistic. Anyway, I think that it was important for these two to have experienced life apart because it allowed them to have a better appreciation of what they could have as a couple. I seriously loved King, but I was iffy on Stella for a good, long while, although she did manage to win me over. So, inasmuch as I would have wanted to give Winning My Best Friend's Girl five-plus stars for the story and King, I'm rolling it back to "just" five stars. Now, the waiting game begins for the final full-length Baileys book!