Review: How to Date a Younger Man by Kendall Ryan 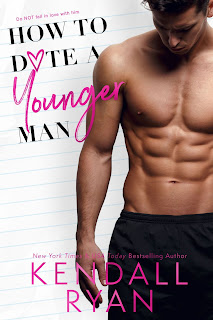 I do love a well-written age-gap romance, especially when it's the female main character who happens to be the older one in the couple. Kendall Ryan's newest standalone tackles exactly that and adds in the whole falling-for-my-best-friend's-sibling angle just to make things even more interesting. How to Date a Younger Man is all about the slow burn and has the main characters meaning four years prior and follows their story from there. Layne was thirty-three when she first met Griffin, who was ten years her junior. She had no idea at the time that he was her best friend's younger brother, so if the age gap alone wasn't enough to dissuade her from giving in to his flirtations, their shared connection with his sister was another reason to resist. After all, Griff is nothing like the Mr. Right she has in her head and she needs the perfect guy to be her partner in her life plan. But what if her Mr. Right is all wrong?

Umm, I'm going to need to nominate Griff is one of the top three book boyfriends that Kendall Ryan has ever created because this guy was everything Layne didn't know she needed. Seriously, the guy was swoon-worthy and I need to tip my hat off to him for his unbelievable patience and perseverance when it came to Layne. I wouldn't say he actively pursued her over the four years that their story plays out in the book, but he was consistently present--one of the few constants in Layne's life that she could count on, even when she didn't fully realize that he was exactly what she wanted and deserved. I absolutely adored Griff, and while there were many moments where I was rather frustrated with Layne, I totally get that sometimes, you need to kiss a frog or two before realizing that the perfect guy has been right there in front of you for years. Le sigh. Ryan's How to Date a Younger Guy is a four-starred charmer of a read.

Purchase How to Date a Younger Man on Amazon | Apple Books | B&N | Kobo.