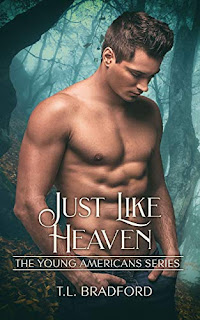 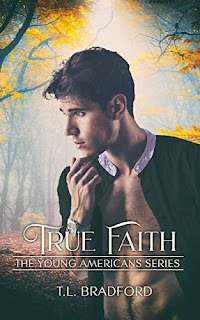 Note: Review copies were provided by the author via GRR ARC Team.

T.L. Bradford is a new-to-me author, and the first two books in her Young Americans series are my introduction to her writing. For the sake of keeping things simple and concise, I'm writing one review for both Just Like Heaven and True Faith (books one and two in the series, respectively). These books focus on the same couple, Noah Sinclair and Joshua Hill, the former being an established actor in a fictional Netflix-streamed show called Americana in the role of Jace Alexander, and the latter being a promising new actor who has been cast as Jace's latest love interest, Max Shephard. Both men identify as straight, but that doesn't stop either of them from noticing the other the first time they meet. Acting like a couple in front of the camera is one thing, but once those cameras stop rolling, how will they explain the desire to be together?

Just Like Heaven was a long read. A REALLY long read, far longer than I was anticipating. I'm not saying it's like War and Peace or Gone with the Wind in terms of length, and I certainly have read more than my fair share of lengthy novels, but my issue isn't merely the number of pages but what's on those pages. There were parts of Noah and Josh's story that were not all that necessary, so they came off as more filler than actual significant content. There was also a lot of back and forth between the main characters, and I confess that there were moments where I grew frustrated with them, each one hesitant to the idea that maybe they aren't as straight as they once thought or believed themselves to be. While there was certainly a fair amount of attraction between them, I wasn't fully convinced that these two belonged together.

True Faith continues the story of Noah and Josh. Fair warning: Going forward, I may mention something that may turn out to be spoiler-like if you've yet to read either of the books. With that being said, feel free to skip this part of my review. Book two picks up where book one left off. After everything Noah and Josh went through, you'd think they'd finally earned that happily-ever-after of theirs, but nope! There were obstacles and challenges to be overcome, and you know what they say about the things that are worth having... This was a far better read compared to its predecessor. It was still rather long, but not as long as book one, and the pacing went hand-in-hand with the development of both the characters and the story. Noah won my heart over the span of both books, having come so far and fully embracing his truest self.

This series is not an easy read. There's a great deal of angst as well as heavier themes that make for some thought-provoking moments. The books must also be read in order for a better and fuller appreciation of the story that they have to tell and the journey that both Noah and Josh go through as individuals and as a couple. There's a fair bit of telling rather than showing, but there is also a fair bit of promise in this author, which has me hopeful that she will only continue to hone her craft with each new book that she releases. I'm glad I was able to read both books because I witnessed what it took for Noah and Josh to get to the point that they were in at the end of the second book and saw the evolution of their relationship from co-workers to life partners. I'm awarding Just Like Heaven three stars and True Faith four stars.