Review: Diamond in the Rough by Skye Warren (Diamond #1) 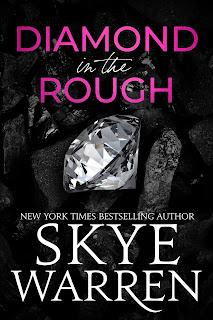 It's here! It's finally here! After reading the books about the two older North brothers--Liam North in the North Security trilogy and Joshua North in the Audition standalone, we now have the youngest brother's story, Elijah North in the Diamond series. For the record, each brother's tale can be read independently of the others, but having followed the Norths, I feel rather emotionally invested in not only getting each of their stories, but also seeing them get their respective happily-ever-afters as well, though experience has shown that nothing comes easily to these brothers, and their HEAs are very well-earned.
When Holland Frank meets Elijah North, it's an encounter that stays with her for years to come. Her feelings for him are based on their brief yet memorable time together. When their paths cross again, however, it's under less than ideal circumstances. You see, Holly has been taken and is now being kept prisoner in an abandoned church. She isn't alone. Beside her is someone else--another captive being held in a separate cell. Could they have been taken for the same reason, and will she be able to trust him in order for them both to escape or will he end up being the true predator merely waiting on his true prey--HER.
When I read Hidden Gem, the free prequel novella to the Diamond series, my curiosity was super piqued and for good reason. As has been the case with the author's other free prequel novellas, this one has been included as part of Diamond in the Rough, so if you've yet to read it, no worries. Holly was only sixteen and Elijah eighteen when they first met, and eight years later, their reunion isn't the stuff of fairy tales. I don't want to give too much away, so yes, I'm being evasive and cryptic. This does end in a cliffhanger, so consider this a caution! Diamond in the Rough gets five stars. Let the waiting game begin.