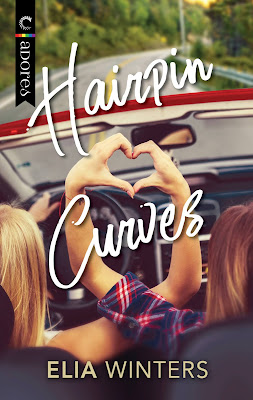 Megan Harris had hopes of seeing the world, but at twenty-five she’s never even left Florida. Now a wedding invitation lures her to Quebec…in February. When her ex-friend Scarlett offers to be her plus-one (yeah, that’s a whole story) and suggests they turn the journey into an epic road trip, Megan reluctantly agrees to the biggest adventure of her life.

A week together in a car is a surefire way to kill a crush, and Scarlett Andrews has had a big one on Megan for years. The important thing is fixing their friendship.

As the miles roll away, what starts as harmless road-trip games and rest-stop dares escalates into something like intimacy. And when a surprise snowstorm forces Megan and Scarlett to hunker down without the open road as distraction, they’ve got a bigger challenge than making it to the church on time: facing the true nature of their feelings for each other.

An Ecerpt from Hairpin Curves
Megan hadn’t brought a lot of clothing on this trip, anticipating getting to do laundry at some hotel along the way, but she had a couple of nice outfits in addition to the dress she planned to wear for the wedding. She selected an emerald green sweater dress from her suitcase. She was normally more of a jeans kind of girl, but this dress made her feel cute, and it felt very Nashville when she paired it with some knee-high boots. She gathered up her clothes and undergarments and headed for the bathroom.

When she left the bathroom, Scarlett was pinning up her curls into two buns up near the top of her head. It was one of the cutest hairstyles she wore, and one that always made Megan wish for something other than her own super-straight brown hair. Scarlett looked away from her hair when Megan entered the room, her gaze skimming down Megan’s body in a way that made Megan burn up inside.

Before Scarlett could say something, whether it was going to be a compliment or not, Megan blurted out, “I don’t know what to do with my hair.”

Scarlett tapped her lips, studying her like she was an interesting painting. “You want me to curl it?” Scarlett asked.
“My hair doesn’t curl.” Megan had never had any luck with that. “It’s too fine.”

Scarlett tucked the final bobby pin into her own style and walked over to Megan, running her hand through Megan’s hair. The contact sent a chill all down Megan’s spine. Oh, she wanted Scarlett to keep touching her like that.

“It’s pretty fine.” Scarlett gathered up a bunch of Megan’s hair in her hands. Megan shivered. Hopefully Scarlett wouldn’t notice the shiver. “It would curl if you didn’t wash it so much. You need it to get dirty.”

Megan laughed, and it sounded breathless coming out. “I don’t really do dirty.”

Scarlett still had the hold on her hair, and she tipped Megan’s head back to look at her. “You sure about that?”

The unspoken after last night hung in the air between them. Megan sucked in a breath, her lips parting, and their gazes locked. Then it was like Scarlett had suddenly realized what she said, and she slid her hands out of Megan’s hair and backed away. “Your hair is cute just like it is. You don’t need to do anything to it.” She turned toward the mirror again and fumbled with her makeup bag. Was it Megan’s imagination, or were Scarlett’s hands shaking? “You, uh, ever think about cutting it?” Scarlett asked.

Megan was still rattled and warm all over. It took her a moment to process Scarlett’s words. “Oh. Yeah, actually. Sometimes I think about a pixie cut. Cutting all of it off. But I get nervous.”

“It’s a big step. But you’ve got the perfect heart-shaped face for it.” Scarlett glanced over, then back at the mirror. “If you ever want to do it, there’s probably a million great salons along our road trip. Could be a fun change. And it grows back.”

She was talking fast. Megan was having a hard time thinking. “Yeah. Maybe. I’ll…do my makeup.”

She had the new makeup from Sephora to try, and while it wasn’t her area of expertise, she put together what she hoped was a good look—not super fancy, but she didn’t end up looking like a clown, either. When she returned from the bathroom, Scarlett was done.

“What about lipstick?” Scarlett asked.

“I’m wearing some.” Megan resisted the urge to touch her lips in reflex.

“You need a bold lip. Something really red. It would bring the whole look together.”

“I don’t have anything really red.” Megan stuck with all light pinks whenever she got makeup, which wasn’t very often. Red was showy and ostentatious, and she wasn’t the type of person to try to get noticed.

Scarlett rummaged in her bag and pulled out a lipstick. “Here. Let me.” She touched Megan’s chin, gently tilting her head back, and then began to apply the lipstick with focused precision. Megan tried not to shiver as Scarlett held her face perfectly still, her attention locked onto Megan’s lips. When she finished, they held that pose, and desire flared up in Megan like a flashover. She wanted to lean forward and ruin that perfect lipstick against Scarlett’s berry-red mouth. 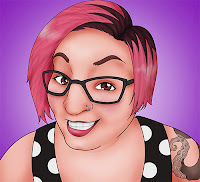 RITA™ Award-winning author Elia Winters is a fat, tattooed, polyamorous bisexual who loves petting cats and fighting the patriarchy. She holds a Master’s degree in English Literature and teaches at a small rural high school, where she also runs the drama club. In her spare time, she is equally likely to be found playing tabletop games, kneading bread, cross-stitching, or binge-watching Marie Kondo. 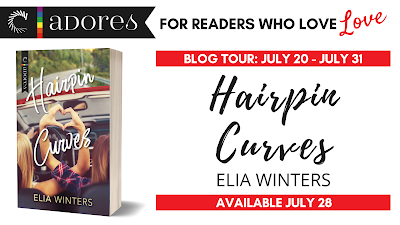