Review: Clean Up on Aisle Mine by Patricia Logan (A Spy Like Me #1) 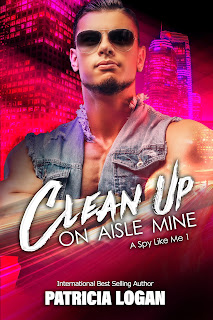 Clean Up in Aisle Mine isn't just the first book in the A Spy Like Me M/M romantic suspense series, but it also happens to be my first ever read by Patricia Logan. Sad, I know. But hey, now I know what the heck I've been missing--because trust me, this new series starter opened my eyes!--and I've added a slew of titles from Logan's back list to my never-ending to-be-read list (I've never been so happy to have finally gotten Kindle Unlimited!). Back to her latest release, though, which was quite an impressive introduction to both her writing and to this new series. I don't think it's a spin-off of any of the author's previous series--but don't quote me on that--because it reads extremely well as a standalone, although it looks like the rest of the books, or at least the next one, will feature the same couple, and you won't hear complaints from me!

Readers meet thirty-year-old Damon Thorne and twenty-eight-year-old Jude Chenoweth, the former being a CIA operative turned privately contracted "fixer" and the latter the openly gay and liberal son of a Republican senator and an artist and set designer. When Jude's perceived antics threaten his father's upcoming campaign for re-election, Damon is brought in by the senator's camp in order to ensure Jude doesn't get caught doing something that will derail the campaign. The best way for Damon to keep an eye on Jude as well as keep him away from the crosshairs of the paparazzi is to have him stay in Damon's loft, but being in close and forced proximity to each other only ramps up the attraction they have for each other. Damon is haunted by his past and his present job is dangerous; is Jude up for the challenge?

This was a really strong start to a new series, and I appreciated the fact that readers get to delve deeper than the norm when it comes to who Damon and Jude are as individuals. We get their back stories while also exploring who they are at present. It's clear that they have their differences in terms of history, personality, and circumstances, but all those differences allow one to offer up a perspective that maybe the other hadn't yet considered. I seriously enjoyed both the romance and suspense aspects of the story, and the main characters are backed by notable and memorable supporting characters, particularly, Leah, Merill, and Cooper, although Leah was the standout. Tension-filled and wholly entertaining, Patricia Logan's Clean Up on Aisle Mine made for a thrilling read, and I can't wait for more. It gets 4.5 stars. ♥

Purchase Clean Up on Aisle Mine on Amazon.