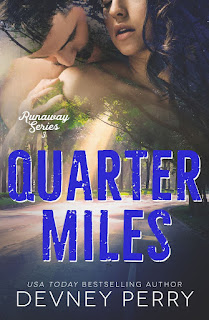 I was fully prepared to wait for Quarter Miles to be released in August, but when Devney Perry announced that she'd decided to move the release date forward by a month, well, hello, who the heck was I to say "no"?! After that ending in the second Runaway book, I was eager to find out how everything would play out in this third book. Would a road trip to Oregon to hand over the keys to a red Cadillac help thirty-year-old Katherine Gates to finally let go of all her unrequited feelings for her best friend, Cash Greer? She had a plan, and it didn't include him tagging along, but tag along he did. He'll only ever see her as a sister or a friend, and maybe it's time for Kat to accept it and move on. Or could being on the road and in closer proximity will finally--FINALLY--help Cash to realize what's been right in front of him all this time?

Devney Perry's Runaway series is like the gift that keeps on giving. These books aren't as long as her others, but fewer pages doesn't mean less of an enjoyable read. I love how each of the books tells its own story and is able to provide a happily-ever-after for every single one of the couples so far while also remaining connected by way of the red Cadillac that's being driven from one state to another and passed on from one person to the next in a once close-knit group of teens who lived in a junkyard in California. Katherine and Cash's story is a friends-to-lovers romance, and it has a delicious amount of angst nicely counterbalanced by humor. There's an ease in the banter and connection shared by these two main characters that belies the complexity of Cash's relationship within his family and Katherine doubts as to belonging with the Greers as well as thinking Cash could never return her not-so-platonic feelings for him. Quarter Miles gave me all the feels, and it sets things up rather nicely for the next book in this wonderfully conceived book series. Five stars.