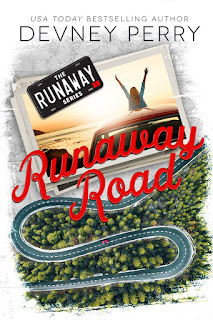 Runaway Road is the first book in Devney Perry's new Runaway series, and if the rest of the books are as good as this series starter, then it's going to be one heck of a ride. There once was a time when a group of six runaways who became each other's family and called a junkyard outside of Temecula, California their home. As the years would pass and circumstances would change, life taking them down different paths. Londyn McCormack was sixteen when she left her drug-addicted parents and began her journey on the road, one which would later lead her to Boston, where she would live life as a married woman in the lap of luxury. Once she finds her husband cheating on her, however, Londyn decides it's time to get back on the road. Now twenty-nine and with a few essentials and her cherry-red 1964 Cadillac DeVille convertible, she has no clue where she's headed, only that she hopes to find a long-lost friend. On the way to anywhere, a flat tire becomes a detour, one that has her proceeding to Summers, West Virginia. There, her path intersects with that of thirty-three-year-old Brooks Cohen, and life will never be the same again for either one of them. The question is, will Lon choose to walk away or perchance stay?

This may sound corny, but I always think of every new book I read as a new adventure I get to go on, something that I told my young students when I used to teach. Devney Perry's latest novel felt just like that--an adventure that I got to go on alongside Londyn, Brooks, and the supporting cast of characters. The destination is known even before I start reading--a happily-ever-after--but that's all that's guaranteed, other than Perry's always impeccable storytelling. So I went along for the ride, and I loved every second of it! This was a lighter read compared to my previous reads from the author, but it still has that pinch of angst that more than satisfied my angst addiction. Londyn and Brooks were a twosome that seemed destined for heartache, what with her being more free-spirited and ready to hop in her car and head to parts unknown and him being far more settled, with roots in his hometown and a son to take care of. Yet love always finds a way, and well, it found its way to Summers. Aside from the happy ending for Londyn and Brooks, it also sets up the next book in the Runaway series rather nicely. I can't wait to see what happens to Londyn's best friend, Gemma Lane, in Wild Highway. Five stars go to Runaway Road. ♥