Review: After This by Liora Blake (Reluctant Hearts #1) 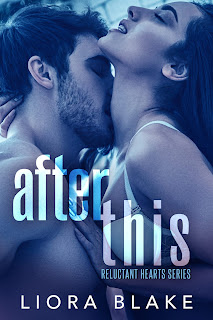 Note: A review copy was provided by the author via Xpresso Book Tours.

After This is the first book in the new Reluctant Hearts series from Liora Blake, an author whose two previous series I loved reading. This series starter, which was released in April of this year, is the story of Alec Mason, the thirty-two-year-old Vice President of the family-owned Mason Enterprises real estate and oil and gas company, heading Public Relations and Community Impact, and Sage Wells, the twenty-nine-year-old daughter of the owner of Rocky Mile Raceway, the very same raceway that sits on property that Mason Enterprises wants but the Wells family refuses to sell. Tasked to seal the deal, Alec leaves Houston, Texas for Denver, Colorado, and convincing Wesley Wells to sell is made doubly difficult because he knows he has to convince Sage and her brother, Cody, as well. Add to that the fact that Alec is attracted to Sage, and try as she might to pretend she isn't drawn to the man bent on buying their property, Sage is just as drawn to Alec. Giving in is a matter of when, not if--but their attraction is one thing, the raceway is a whole 'nother beast.

Ah, how I've missed Liora Blake's brand of storytelling, and she certainly told the kind of story I love to read. Alec and Sage were from two different worlds, but no one ever said that differences meant never being together. These two had their struggles, especially given the fact that Alec's family was intent on getting Sage's family to agree to sell their property. I'm glad Blake didn't go with the well-worn story line of unethical business practices on Alec's end just to get what they wanted. Nope, the Masons were not your stereotypical wealthy people who saw something they desired and went after it without a care of who got in their way. I appreciated that the author took this story in a direction not often seen in the books I read that have the same basic story line. I loved that Alec was truly a good guy and that Sage was a woman who was independent and fought valiantly for her family and their legacy. After This was a great start to the Reluctant Hearts series, and I look forward to more. 4.5 stars.

Purchase After This on Amazon | Apple Books | B&N.