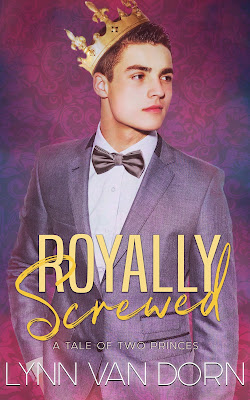 Prince Angelo is destined to marry Prince Yuri. Never mind that Angelo isn’t gay and didn’t choose to be saddled with a moony-eyed princeling who is determined to ruin Angelo’s life. Then one day Yuri goes too far and Angelo has to take matters into his own hands.

Prince Yuri is destined forever to pine after Prince Angelo. Arranged marriages are archaic and awful enough without being stuck for life with someone you want who will never, ever in a million years want you back. Still, for someone who claims to want nothing to do with Yuri, Angelo is surprisingly possessive.

Two men, thrown together by fate and scheming parents, shouldn’t have a prayer of finding a happy ever after. But fate can be fickle, and love can exist where you never thought it could.

Royally Screwed is a 75,000-word M/M novel featuring royalty, a poorly-thought-out betrothal, one prince in need of a firm hand, a second prince who isn’t as straight as he always thought, drunken texting, bickering, practice kissing, odious British nobility, and falling in love despite all the reasons why you shouldn’t. 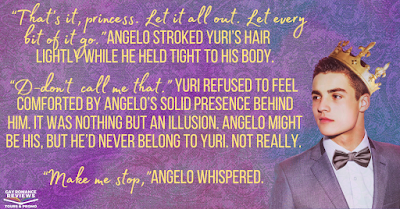 An Excerpt from Royally Screwed
“I'm going to be your husband,” Angelo said, “sooner or later, like it or not. What's the point in putting it all off?”

Yuri raised one finely shaped brown eyebrow. “So you're cool with not having sex again for like… ever? Or kissing or holding hands, even? Because I'm not. I'll go mad. I'm not ready yet. It's way too soon.” He looked at Angelo like he was an animal caught in a trap, terrified and half-crazed to escape in any way it could, even if that meant chewing through a limb.

Angelo rubbed Yuri's shoulder tentatively. “I know,” he said soberly. “I've been thinking about it for days.”

The idea of Yuri putting himself again into the hands of Francis, or someone like him, terrified Angelo. It didn't matter that Yuri was gay and Angelo wasn't. Someone needed to protect Yuri and that someone was Angelo. Would always be Angelo. Yuri was his curse and his cross to bear and his inevitable destiny. And despite years of resentment and irritation and anger, that still made Yuri his.

Yuri relaxed his stiffened posture enough to slump against Angelo. “Angel, it's a really stupid idea. We'll keep going on as we are. We've got years to date and 'fall in love.' No point rushing it. You'll have to pretend your whole life. Be discreet when you need to fuck someone. You won't be allowed to fall in love, and if you do, you'll never be able to act on it. I get you're feeling overprotective and cave mannish, but you don't need to be. I'll be way more careful next time. I'll find someone who can hurt me, but not hurt me. Those men exist. I know they do. Let me find one and live before my freedom is completely gone.”

Nervous fear dumped adrenaline into Angelo's bloodstream. It made him want to do something—anything—to make things better. “I can do that,” Angelo burst out, licking his dry lips. “I can be that man. For you. For this.”

“Do what, be what?” Yuri put his mobile aside and gave Angelo his full attention, spearing him with crystalline blue eyes. “You're. Not. Gay.”

Yuri rolled his eyes. “Seriously? I can see you sweat from just the thought of it. What about the rest? Can you really kiss me in front of others? Pretend for the rest of your life to be in love with me? Do you have any clue what this'll mean? I don't think you do. You don't have to protect me. I'm fine. Francis was a huge mistake, but I'm fine. Go home to your college and your girlfriend and forget about me for a few years. I don't want this, you big idiot!”

Yuri was angry and impatient, that was clear enough, but under that, Angelo thought he sensed fear as well. And he caught the use of Angel. Yuri called him that so seldom he felt he could count the times on one hand, but tonight he'd used it twice.

“It doesn't matter what we want, does it, though? What if I say, 'Fine, go find some perfect guy to spank and fuck you. I'll see you in five years,' and then you fall in love? What're you going to do then? Break your heart and his? There's no way waiting will make things better, or easier. I can't… be everything you need and you're not what I want, either, but I can do my best to try. If it means I have to learn to kiss you, then I’ll learn to kiss you, but damn it, princess, I’m not going to let anyone hurt you like this anymore.”

Yuri crossed his arms over his chest. “I don't believe you. I don't think you have the stomach for it.”

Part of Angelo knew he was being goaded but he didn't care. He cupped Yuri's face and looked into eyes that were panicky, but something else as well. Yuri's gaze felt like it could bore holes into his soul. “Relax, princess. I can't do this if you won't relax.”

“Fuck me,” Yuri said. “This isn't real. And I didn't mean that literally. Don't get your straight-boy hopes up.”

“I wouldn't dream of it,” Angelo said, leaning closer to whisper in Yuri's ear. He dropped a light, experimental kiss on the side of Yuri's jaw. Under his fingers, the prince shuddered.

There. That hadn't been so bad. This would be easier than Angelo had thought. With his cupped hands, he positioned Yuri's face exactly where he wanted it, then kissed him. It was… unexpected. It wasn't at all the disgusting thing he'd thought it might be. This he could definitely do. Everything would be fine. And just to prove it, he kissed Yuri again. And again. And again. Because practice made perfect. 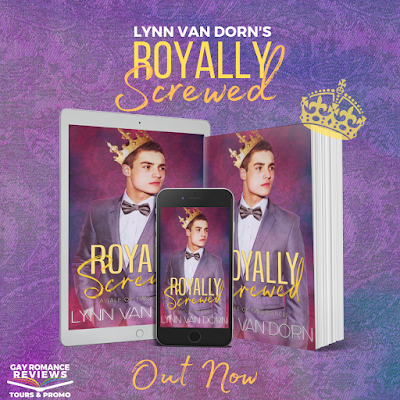 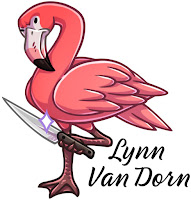 Lynn Van Dorn was born in Ohio and left it for the wilds of Chicago in her reckless youth. She wanted to become a fairy princess when she grew up, but since there are few openings for that position, she makes do with being a writer.

In her spare time, she drinks entirely too much tea, snugs her cats, loves her husband and son, reads voraciously, and avoids housework. She loves to watch anime, travel, knit, bake cookies, and conjure up happy every afters for handsome men who have trouble getting there on their own. 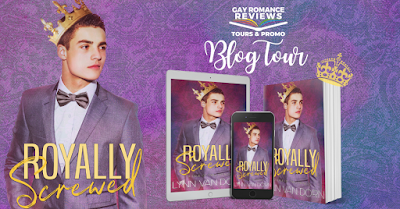