Review: No Reservations by Stephanie Rose 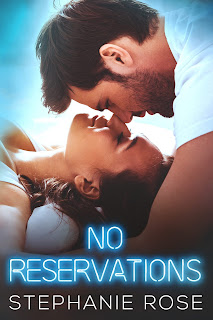 No Reservations is the companion novel to Stephanie Rose's No Vacancy--a book I rather adored!--and I'm happy to say that it's just as wonderful a read as the one before it. You can go into this book with no reservation (see what I did there?), but if you're like me and you like having your back stories in order (or you simply love a really good romance), I highly recommend you read No Vacancy before jumping into No Reservations, though for the record, you don't necessarily need to because each book is about a different couple and can stand alone quite well.

When Domenico Gallo left New York to mourn his beloved mother, Theodora Kelly had always expected him to return. He said he needed to be alone, and she respected that, and so she waited until it became painfully clear that when Dominic had left the city, he had left Thea behind as well. Four years pass and Thea finds herself along the Jersey shore, in the small town of Ocean Cove for eight weeks as the relationship manager of the investment group she's part of and the restaurant bar they wanted to work with--the very same one where Dominic works at.

I love a well-written and thoughtfully put-together second-chance romance, and that was precisely what Stephanie Rose has given readers with Dominic and Thea's story. I appreciated that there was a fair amount of trepidation on Thea's part and that Dominic did not push too much, providing her with space and patience. It's the hard-fought and well-earned happily-ever-afters that I care for most, and with this author's gift for storytelling, I was far from disappointed. Bonus points for Joe and Caterina as supportive secondary characters. Five stars for No Reservations. ♥

Purchase No Reservations on Amazon.