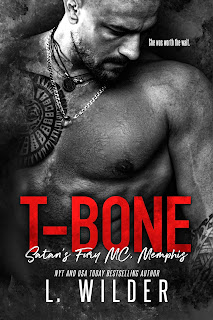 When it comes to the motorcycle club (MC) romance sub-genre, L. Wilder is one of my favorite go-to authors. My introduction to her writing came by way of the original Satan's Fury MC series, and I've been hooked ever since. Funnily enough, I have yet to read her debut series, Devil Chasers MC, but now that I have Kindle Unlimited, I'll finally be able to check those books out. I digress, but what I'm basically trying to say is that Wilder's MC romances are what caught my attention and whenever she has a new book out under the sub-genre, reading it is a no-brainer. T-Bone is that newest book, and it just happens to be the ninth (!) one in the Satan's Fury MC: Memphis spin-off series. Because there are certain past story lines that are mentioned here, I highly recommend that you read the books in order for a more well-rounded experience.

T-Bone is the story of Beckett Walker, aka T-Bone, a member of the Satan's Fury MC's Memphis chapter for the past two and a half decades. He loves the life that he's led for twenty-five years and wears his cut proudly. Watching his other brothers find their ol' ladies has made him wonder if that sort of future is in the cards for him, but he sure as hell never thought he'd consider sharing it with his newest brother's younger sister. At twenty-one, Alyssa Hanson was way too young for T-Bone, not that he even thought he had a shot with her. He was more than twice her age and he was a bald-headed biker who happened to belong in the same club as her brother, Clay, aka Hyde. But from the moment she set eyes on him, there was no looking away for Alyssa. However, will her past and his loyalty to the club cost them a chance at love?

Who would have thought T-Bone was such a romantic?! Gah! I seriously adored the guy. He was protective and attentive and would obviously do anything for those who meant something to him, and that included Alyssa from the moment he met her. As for Alyssa, the young woman was resilient and truly did strive to move forward with her life. I can't go into details as to what she went through, but suffice it to say that she was a survivor and not a victim. There's a nice mix of romance and action here, and I liked seeing certain events that played out in the past books from T-Bone's perspective. His love and loyalty to the club--Gus, in particular--made him even more endearing. I'm not sure if T-Bone is the final book in the series, but if it is, L. Wilder is closing things out on a high note, and as a fan of the series, I am satisfied. 4.5 stars.