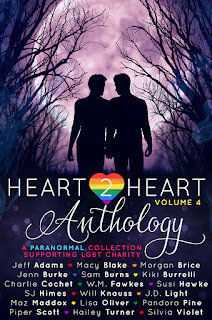 One of my favorite anthology series is Heart2Heart because every time the newest collection comes out, not only do readers like me have a slew of great short stories to peruse, but the proceeds go to a number of LGBTQIA+ charities. The fourth volume was released a couple of weeks ago, and this time around, the eighteen participating authors--four of whom worked as pairs--have come up with sixteen different tales that share two things in common: they're all paranormal romances and they all have main characters who call into the Heart2Heart podcast and let the host, Gene E. Del'Amp, know the wishes of their hearts. For the purposes of this review, I was able to read six of the stories: A Caller from Windermere by Charlie Cochet, A Caller from San Francisco by Hailey Turner, A Caller from New Orleans by Lisa Oliver, A Caller from Chicago by Piper Scott, A Caller from Savannah by Silvia Violet, and A Caller from Austin by Susi Hawke. I'll edit this review as I finish the rest of the short stories.

A Caller from Windermere is penned by one of my favorite go-to authors, Charlie Cochet, and she offers up the story of a mage named Salem Havercroft. He's the youngest among his siblings and is embarrassed by the fact that his one gift is that of conjuring up lasagna. He's got a mad crush on Izzie, a dog shifter and bodyguard who happens to be his oldest brother's best friend and also works for Salem's father. This was my first story in the anthology and I enjoyed it immensely. I loved the hint of suspense mixed in with the Salem feeling like the lovable loser in his family and how he thought someone like Izzie would never be interested him. This snags four stars.

A Caller from San Francisco is from Hailey Turner, and this was certainly gets bonus points on the original choice of shifter. Ethan Smith is a selkie shifter who is all the way in UC Berkeley working on his master's degree, far from his beloved family. When a fire in his apartment building puts his pelt at risk, a kind-hearted firefighter from a line of witches and warlocks named Jacob Gallagher rescues it. I quite enjoyed the fact that Ethan was a selkie shifter, which is something I've never come across in any of my previous shifter romances. I liked the connection that he shared with Jacob and how there was an ease to the readability and flow of the story. It gets four stars.

A Caller from New Orleans is my first-ever read from new-to-me author Lisa Oliver, and I quite enjoyed this short story of hers! Bailey Dearne is a hedgehog shifter who works as a certified accountant and is called into his office by police when his boss's body and that of a fellow employee's are discovered. One of the detectives in charge of the case is Sin Rand, a wolf shifter and known for his countless no-repeat hook-ups. The whole hedgehog shifter angle was new for me, and I loved the originality, especially given the fact that Bailey was Sin's mate! The suspense part mixed in well with the romance, making this one of my favorite stories in the anthology. Five stars.

A Caller from Chicago by Piper Scott tells the story of a kinda-sorta-maybe-not-quite demon named Jackson, which isn't really his name, on the hunt for an angel who has set their sights on a human Jackson has nicknamed Cutie, but whose real name is Dylan. When the angel arrives at Dylan's doorstep, there's only one way for Jackson to save him, and convincing the human may not be as difficult as he thinks. Okay, as much as I love Scott's small-town books under her Emma Alcott pen name, this paranormal romance had me feeling lost. The story was, at times, confusing, and it came off as rushed. Jackson's sister Rage was more annoying than funny. Three stars.

A Caller from Savannah is from Silvia Violet, whose work I've enjoyed in the past, and I was happy to be reacquainted with her writing with this sweet read. Kai is an aspiring baker who would love nothing more than to merge his love for baking and his magic to create unique sweet concoctions in his own bakery. He gets his opportunity when he joins a competition, but winning the heart of an engineer who also happens to be his competitor could be the best prize ever. This was such an enjoyable read, one that was low on angst, making for a lighthearted and heartwarming experience. This was definitely one of my favorites and gets five stars.

A Caller from Austin is from Susi Hawke, and while I've read all of her books under her Susan Hawke pseudonym, this short story is officially my first under her Susi Hawke name. Darcy Valentine may offer sanctuary to almost everyone, but he isn't exactly thrilled to find a vampire with a human in a wheelchair on his doorstep. When the vamp turns out to be his favorite author, Storm D'Arcy, and the human Storm's sister, Darcy invites them in, but trusting a bloodsucker is no easy feat. I really liked this story! I enjoyed the cast of characters and the pacing of the story. My one complaint would be that it was that I needed more! I'm giving this one 4.5 stars.