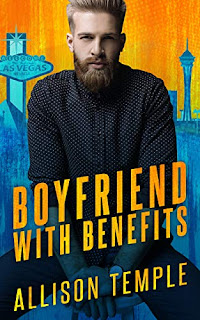 Note: An advanced reader copy (ARC) was provided by the author via GRR ARC Team.

Boyfriend with Benefits is a new novella from Allison Temple and this quickie read tackles the fake boyfriend trope with Temple's own creative touch to it. Bailey is a workaholic who finds himself working with his nemesis from high school, Jake the Jerk, thanks to a merger that brought their companies together. To make matters worse, Jake spies a photo of Bailey with his roommate, Gordo on his phone, who Bailey claims is his live-in boyfriend. Now, Bailey has no choice but to convince Gordo to go with him during the company retreat to Las Vegas and pretend to be his boyfriend for a few days. By the end though, will Bailey want to be boyfriends for real and with all the amazing irresistible benefits that come with being with Gordo?

Allison Temple's books have always been enjoyable reads, and this new novella definitely follows suit. While not necessarily groundbreaking in terms of story line, Temple's writing style and insertions of humor coupled with the two main characters, particularly the enigmatic but endearing Gordo, made this an all-around entertaining read. Bailey's workaholic ways were in direct contrast to Gordo's far more laidback approach to life in general, but there was a connection between them that may not have been overtly noticeable yet demanded to be explored once it was obvious that there was more than friendship there. Jake lived up to the moniker bestowed upon him, and I was all for his comeuppance. I'm giving Boyfriend with Benefits four stars.

Purchase Boyfriend with Benefits on Amazon.