Review: Love Her by Andrea Johnston (Military Men of Lexington #3) 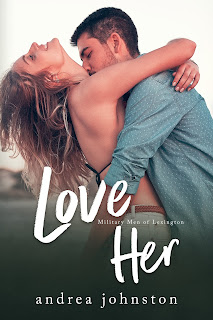 Love Her is the third and final book in Andrea Johnston's Military Men of Lexington trilogy. Not only does it conclude the series, but brings it full circle with the author's Country Road series. You don't necessarily need to read any of the previous books in either of the aforementioned series; however, both main characters, Connor Hall and Felicity Thorne née Remington, were supporting characters in other books AND there are recurring characters that make appearances in this new release. Also, I think reading the earlier books will give readers a better appreciation for Felicity's and Connor's respective stories, as well as their journey as a potential romantic couple.


In a town as small and close-knit as Lexington, everyone knows everyone and when you've made reputation for yourself, whether good or bad, it tends to stick, no matter how many years pass. Just ask Felicity Remington-Thorne. She was her class's mean girl and she had no qualms living up to the hype. She left her small town, got married and had two children, and lived a privileged life before realizing not everything was as it seemed. Now divorced and living with her parents back in Lexington, Felicity knows that people around town look at her and see the mean girl she was back in high school. Everyone, that is, except for her new boss and his wife...and a hot former Army man turned hot bartender named Connor Hall. He has no idea of the girl she once was; Connor's interested in the woman that Felicity now is...but for how long?

This was a redemption story that came together rather nicely, and if you've read the the author's Country Road series, you'll see why Felicity needed to redeem herself. It was clear from this newest book that she'd done a whole lot of growing up since she was the mean girl in high school. Admittedly, her reasons for becoming the mean girl weren't the kind that really excused her bad behavior, not that there's much excusing that sort of thing. I loved that Connor saw beyond her past, and that he wanted to explore the possibility of something more between them in spite of whatever he was hearing around town. I did wonder, though, why Gigi and Brian seemed to have disappeared in the epilogue, especially considering how important they were in both Connor's and Felicity's lives. Still, Love Her wrapped the Military Men of Lexington series up quite well. I'm giving this series ender four stars out of a possible five stars.

Read my reviews for the Military Men of Lexington series:

Promise Her (book one) - five stars - My Review

Love Her (book three) - four stars - My Review (posted above)

Purchase Love Her on Amazon.