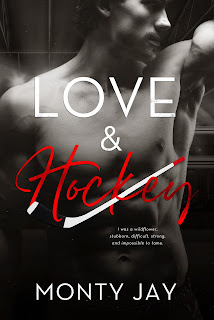 You know how you come across a new author's debut release, you spend a few hours reading it, and one of the more constant thoughts running in your head is: "You've got to be kidding me. How has this author never written anything before this?!" Well, that's exactly what happened to me as I devoured the awesomeness that was Monty Jay's first published novel, Love & Hockey. An added bonus was this was just the opening salvo in a new series entitled Fury, which is part of the name of the professional hockey team that is featured prominently throughout. So, not only is the book an introduction to this new author, it also happens to set the tone for the rest of the series. Suffice it to say, after finishing the book, my expectations are high indeed.

Love & Hockey is the story of Valor Sullivan and Bishop Maverick. She's a hockey wunderkind and daughter of one of hockey's living legends; he's a hockey god who's got a guaranteed spot in the sport's hall of fame, right next to his mentor. Oh, and did I mention that said mentor just happens to be Valor's father who has become said hockey god's close friend? Valor was ten when she met then-rookie Bishop who was already proving his worth at eighteen. Through the years, she was his Vallie, and he was her B. They go from being friends to wanting more, and it almost feels as if they were destined to be together. That is, until fate stepped in and threatened everything.

It's difficult to put into words just how taken I was with this story. Was it perfect? No, but I don't look for perfection in the books that I read simply because it doesn't exist. The promise is there, and in her first outing, Monty Jay shows that she's capable of meeting said promise. I love the story she's weaved together, with interlocking threads that break the mold and make for an intense read. There's a lightheartedness in spite of the angst--and boy, did I love the angst!--and I was captivated from the attention-snagging prologue to the heartwarming epilogue. Vallie and B and the cast of compelling characters shared the kind of story that stays with you long past "the end" and the major book hangover I had was proof of that. The ending has me eagerly intrigued for book two. The bar's set high by Love & Hockey. Five-plus stars.