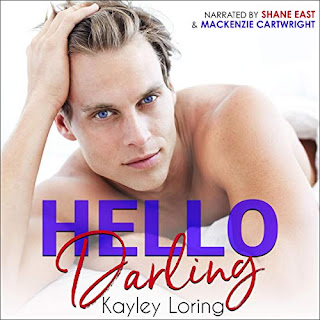 Confession time: I'm a wee bit obsessed with Kayley Loring's audiobooks. To be fair, I've only listened to three titles including this newest one, but the combination of her writing and the fab narrators she seems to have a knack of choosing is like a siren song that I can never seem to resist. Then again, why would I want to, especially given that Loring's stories are my jam, and the minute her narrators begin to breathe life into them, it's like that perfect layer that butters me up. Does that make sense? Probably not, but bear with me. I'm basically saying that I've loved listening to Loring's audiobooks, and the newest one that my ears couldn't get enough of is Hello Darling, narrated by the awesome pair that is Shane East and Mackenzie Cartwright.

Evan Hunter is a British actor who heads to his next film location earlier than planned in order to get away from the bombardment of paparazzi hoping he'll give them something to talk about when asked about his breakup with a starlet ex. Heading across the pond to Port Gladstone was part of his job. He certainly wasn't looking to be smitten by Stella Starkey, the no-nonsense yoga instructor who work at her family's gym. She's like no other woman he's ever met. She doesn't find his dashing good looks or British wit and charm swoon-worthy. You'd think she wasn't interested, but he's pretty sure she is. And even when she admits to herself she's drawn to him, Stella sees this as nothing more than a fling. After all, this wasn't like the movies. There's no way someone like her would ever have any sort of happy ending with someone like him. Right?

Ummm... Where do I sign up to snag myself a real-life Evan Hunter, please and thank you? Hands down, he's one of the swooniest male main characters I've ever come across, and I've read and listened to more than my fair share of romances. It's not that Evan was perfect, but that he was indeed flawed yet had a good heart and a sincerity to him that's far more appealing than all the testosterone-y stuff in alpha- or bully-like heroes. The fact that Evan had friendships with Stella's brothers that were separate from his relationship with her called to me as well. These main characters challenged each other and almost everything they thought they had set in stone in terms of where they saw their lives as individuals--because after all, plans can change when you fall in love. Kayley Loring penned a lovely romance that brought a smile to my face and left my heart feeling full and happy, and she couldn't have picked a better narrating team than Shane East and Mackenzie Cartwright. Five stars for Hello Darling. ♥