Review: Out on the Serve by Lane Hayes (Out in College #7) 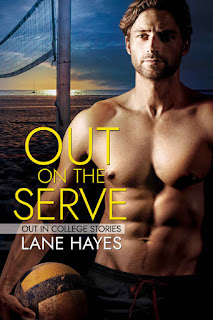 There's a reason why Lane Hayes is a go-to author for me, and the proof is in each new book she releases. I've had an ongoing love affair with her Out in College series from the very beginning, and how could I not love it considering every single book so far has heartwarming and lighthearted stories and main characters that have made me cheer them on to their happily-ever-afters alongside supporting characters that I'm itching to get to know better. I've got my fingers and toes crossed that Hayes has a slew of Out in College books still to come--and thank goodness there are so many sports for her to choose from and write about because I need more from this series.

Out on the Serve is the story of two former competitors turned roommates who become friends and then lovers. New pro volleyball player Elliot Newcombe is in need of a new roommate, and luckily for him, his soon-to-be former roommate has found her replacement, and he happens to be a familiar face: Braden Marquette. They were on opposite sides when they were representing their schools in volleyball, but Braden's moved to Elliot's neck of the woods in Long Beach for a play he's auditioning for. They're drawn to one another and while acting on that attraction is one thing, dealing with family expectations and pressure is a whole 'nother problem.

While Elliot's and Braden's respective exes are past characters in the series, their story can stand alone, so there's no immediate need to read anything prior to this new book (but read the earlier books anyway!). I liked that these two didn't have any sort of insta-anything (not counting the insta-lust, which FYI, was not acted on in the first chapter) because then we get to see their relationship develop and become something that mattered and that they both nurtured. There isn't a whole lot of angst or conflict, but there were complications to their evolving story, and I appreciated these weren't dragged out and resolved satisfactorily. Five stars for Out on the Serve.

Purchase Out on the Serve on Amazon.