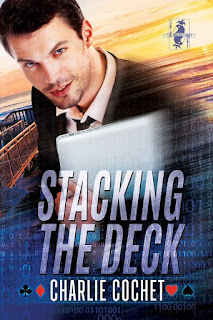 The minute the advanced reader copy for Stacking the Deck landed in my tablet, everything else was put on the back burner because I simply needed to finally begin reading this first book in Charlie Cochet's new series. A spin-off of the author's Four Kings Security series, The Kings: Wild Cards starts off with the story of Jacopo Constantino, better known as Jack, the resident technology whiz in Four Kings Security. Compared to the other guys on the team, particularly his five closest friends, Jack's professional and personal lives seem staid and mundane. Maybe he needs to add a dash of excitement to perk things up... And then Fitz Harlow finally returns to the area after a couple of years, and this time around, Jack refuses to let this chance to see where their chemistry takes them pass them by. Those nearest and dearest to them are thrilled they've reconnected, but it looks like not everyone approves of these two getting their happily-ever-after. With the deck stacked against them, will Jack and Fitz and their trusted team in Four Kings Security be able to beat the odds?

I've been looking forward to starting this series ever since Charlie Cochet announced that Jack and Joker--as well as other members of Four Kings Security--would get their own series. You don't necessarily need to read the Four Kings Security series or even the companion novella, Beware of Geeks Bearing Gifts, which was actually released way before either of the series came along, in order to either enjoy or understand this new book. However, I'd be remiss if I didn't nicely suggest you check them out anyway because they're awesome reads. All that being said, this new series starter was, as I'd hoped for, quite entertaining, with the same brand of humor, action, suspense, and romance that I've come to expect from Cochet. Where it does falter, though, is in the believability of the villain (who shall remain nameless in this review) actually outsmarting not just Jack, but nearly every tech and security geniuses on the team, save for one, but I can't say what happened there because hello, spoiler. It also took a while to get the feels for Jack and Fitz as a couple. I still enjoyed Stacking the Deck, which gets four stars, and can't wait for Joker's book next!

Purchase Stacking the Deck on Amazon.