Book Spotlight: The Woman Before Wallis by Bryn Turnbull 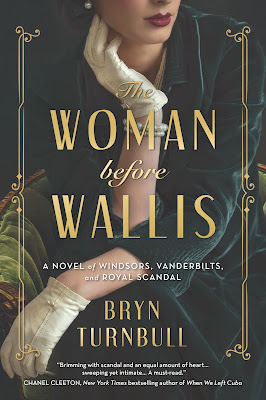 About The Woman Before Wallis
For fans of The Paris Wife and The Crown, this stunning novel tells the true story of the American divorcée who captured Prince Edward’s heart before he abdicated his throne for Wallis Simpson.

In the summer of 1926, when Thelma Morgan marries Viscount Duke Furness after a whirlwind romance, she’s immersed in a gilded world of extraordinary wealth and privilege. For Thelma, the daughter of an American diplomat, her new life as a member of the British aristocracy is like a fairy tale—even more so when her husband introduces her to Edward, Prince of Wales.

In a twist of fate, her marriage to Duke leads her to fall headlong into a love affair with Edward. But happiness is fleeting, and their love is threatened when Thelma’s sister, Gloria Morgan Vanderbilt, becomes embroiled in a scandal with far-reaching implications. As Thelma sails to New York to support Gloria, she leaves Edward in the hands of her trusted friend Wallis, never imagining the consequences that will follow.

Bryn Turnbull takes readers from the raucous glamour of the Paris Ritz and the French Riviera to the quiet, private corners of St. James’s Palace in this sweeping story of love, loyalty and betrayal.


Add The Woman Before Wallis on Goodreads.

An Excerpt from The Woman Before Wallis
ONE

THELMA CONSIDERED MANHATTAN HER HOME, though she hadn’t lived there for over ten years. To her, it was a city of firsts: she had smoked her first cigarette there, a Lucky Strike stolen from a nun’s desk drawer at the convent and passed around the dormitory after bedtime. She and her twin sister, Gloria, had rented their first apartment on Fifth Avenue: an attic brownstone, which, at sixteen years old, they were far too young to live in unchaperoned but did so anyways, stuffing the living room with flowers and leaving the icebox empty. Her first encounter with the society pages had been at New York Harbor: she was eight at the time, mobbed by reporters at the behest of their diplomat father in an attempt to turn the tone of a negative press scrum. The next day’s papers would run pictures not of Harry Morgan on his recall to Washington but of his twin daughters, Thelma and Gloria, walking down the gangplank in matching pinafores.

First marriage, thought Thelma, gripping the sable collar of her coat more tightly around her neck. First divorce. She stayed on deck long enough to watch the ship slip past the redbrick buildings of Southampton before seeking refuge from the chill air.

Though Thelma felt uneasy at the prospect of being away from David for nearly six weeks, she knew that she had little choice: Gloria’s trial had become a media sensation, chewing up columns on front pages across America and Europe. The custody battle, dubbed the “Trial of the Century” by reporters who squeezed onto the courthouse steps each day, was a nightmare for her sister, forced to defend not only her right to raise her own daughter but also to preserve her own good name. Thelma still rankled at the letter Gloria had sent her: For Reggie’s sister to believe what’s being said about me is bad enough, but to know that the rumors came from our own mother is too much to bear…

Thelma knew that the stories would continue long after the trial concluded—it was inevitable, given that it revolved around a Vanderbilt daughter with a Vanderbilt fortune. She had received the letter five days ago and booked passage on the earliest steamer bound for New York. If it had been either of her other siblings—Consuelo or Harry Junior—in this situation, Thelma would have offered what help she could, but as her twin, Gloria held Thelma’s allegiance the strongest. It was how it had always been: one supporting the other.

There was only one consideration weighing on Thelma’s mind which made it difficult for her to focus on what she would find in America.

“Shall I come, too?” David had asked days ago at Fort Belvedere. Dismal weather had driven Thelma, David and their guests indoors, an afternoon of weeding David’s gardens mercifully replaced by card games and needlepoint round the drawing room fire. David laid his embroidery hoop to one side, the half-finished rose pointing sightlessly at the ceiling.

Across the room, Wallis Simpson, perusing the contents of the bar cart, turned.

“Don’t be silly,” she said. From a club chair in the corner, Wallis’s husband, Ernest, folded down the corner of a newspaper. There was a momentary silence as Wallis’s long fingers trailed delicately along the crystal tops of several heavy decanters before she selected one.

“You can’t possibly think it’s a good idea for him to get caught up in this mess,” she said, glancing at Thelma as she poured a neat scotch. “You’ve seen the papers. Can you imagine the sort of froth they’d work themselves into if the Prince of Wales stuck his oar in? I don’t mean to offend you, Thelma,” she said, “but it’s just not seemly for him to get involved, don’t you agree?”

David’s brows knitted together as Wallis handed him the whiskey. “I feel so terrible about it all,” he said. “Gloria’s a decent sort. She doesn’t deserve all this…surely there’s something I can do?” He looked up at Thelma, his spaniel eyes imploring.

Wallis sat down. “You can let Thelma go to support her sister,” she said. “Gloria needs her family, sir, not the distraction of a royal sideshow.”

“Wally’s quite right, sir,” said Ernest, resting his newspaper on his lap. “You’d be hindering more than you’d help. Couldn’t fix me up one of those as well, could you, darling?”

David exhaled, but didn’t look convinced. “Perhaps,” he said, as Wallis returned to the cart. “I wouldn’t want to add any more controversy to this ghastly business, but I hate the thought of you going on your own.”

Thelma sat beside him, smiling at the thought of what David’s advisors would say if he so much as commented on the Vanderbilt trial, let alone sailed to America.

“They have a point,” she said, taking his hand in hers. “I don’t think there’s much for you to do. But thank you for wanting to help.”

He smiled, worry carved into the lines of his face. “Of course,” he said, and kissed Thelma on the cheek. He picked up his needlepoint, lifting the embroidery hoop to inspect the stitching more closely. “Just don’t stay away from me too long. I don’t think I could stand it.”

Perching herself on the armrest of Ernest’s chair, Wallis caught Thelma’s eye. She smiled, red lips curling in a wide, reassuring grin. 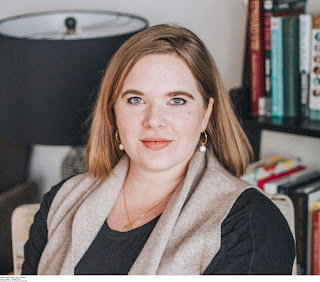 Bryn Turnbull is a writer of historical fiction with a penchant for fountain pens and antique furniture. Equipped with a Master of Letters in Creative Writing from the University of St. Andrews, a Master of Professional Communication from Ryerson University, and a Bachelor’s degree in English Literature from McGill University, Bryn focuses on finding the stories of women found within the cracks of the historical record.

When she’s not writing, Bryn can be found exploring new coffee shops, spending time with her family in cottage country, or traveling. She lives in Toronto, and can generally be found with a book in hand.