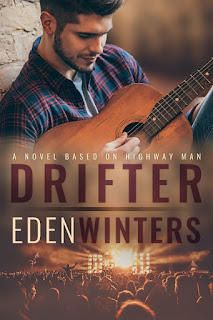 Note: An advanced reader copy (ARC) was provided by the author via Indigo Marketing & Design.

Drifter is the brand-new standalone from Eden Winters, and it's my second read from this author. This was a very different story compared to my introduction to her writing--Consorts of the Red King--and I tip my proverbial hat off to Winters to her ably shifting genres. This latest novel from her is a story set in the world of music, and it comes with a whole lot of angst, which was a total win for me because you know how much I love my angst. When readers are introduced to Killian Desmond, his band, Trickster, is basking in the glory of everything they've achieved and in the promise of what else was to come. But tragedy is what came instead, his brother and two other band mates taken from him, leaving Killian alone and adrift. He continues to play music from place to place, seen as a wayward artist but not recognized as the star he once was, which is exactly the way he prefers it. Then he meets Mike Rose, a young man just as lost, finding peace when he plays on his bass. Together, Killy and Mike create something spellbinding, but will their respective pasts break that spell?

Ah, how I fell for Killy and Mike. These two had such rich back stories, the kind that have broken them and leave you wanting them to have the sort of happily-ever-after that you know fate owes them. As broken as they were when their paths crossed, it never felt as if there was no hope for either of them. Killy was mired by so much misery and mourning that he may have been stuck, but it was both the music and Mike that brought him back from the brink. Mike, too, was going through his own journey, but while his resilience and courage where as clear as day, I think he needed someone like Killy to make him feel like he was going to come first--that he wasn't going to be pushed to the side or seen as nothing more than a hindrance or hurdle. Eden Winters did not disappoint with this book, and in the two or so hours it took me to read this, she took me on the same journey Killy and Mike were on, witnessing firsthand the healing power of love and music. I'm giving Drifter five out of five stars.