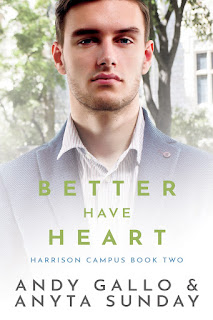 Who doesn't love a fantastically written redemption story? If you've read the Harrison Campus series starter, Better Be Sure, then you'll surely remember Darren Gage, a member of Pi Kappa Phi, the fraternity that Jackson Murphy was also part of. Darren was best friends with the guy who lived to make trouble for Jack and his adoptive brother. In the second book, Better Have Heart, Darren has come out, but he quickly surmises that he's nothing more than a disappointment to his family, particularly his father. Living up to his family's legacy is of utmost importance, and the Gage Scholarship is key in his plan to show everyone that he's worthy. He didn't expect to have to actually go up against with someone for the darn thing, but when Isaiah Nettles decides to file a complaint regarding the process by which a student is chosen, expectation turns into competition. Isaiah needs this scholarship, but then so does Darren, and as the two young men face off, it's winner takes all, but will both of them end up losing their hearts in the process?

Goodness me, but how I adored this story! I'll be honest, I was kinda-sorta-maybe wary of Darren because of how he'd acted in the first book, although there were pockets of time back then wherein he did make me wonder just how much of bad guy he really was. In this second book, readers get a better understanding of who Darren J. Gage V really was beneath the spit and shine persona, and I found myself wanting to actually give him a hug a time or two. Meeting Isaiah was a game changer (but then so was what happened in book one), and while they went into this as competitors who deemed themselves the worthiest to receive the Gage Scholarship, they came to realizations that maybe, just maybe, someone else (cough, the other person, cough) someone was just as or possibly even more worthy than themselves. I loved the connection these two shared, and the whole angle regarding family was as endearing as it was in the series starter. Also, you can jump into this wouldn't having read the previous book, but I quite liked it and have no hesitation in recommending it. I'm giving Better Have Heart 4.5 stars.

Read my reviews for the Harrison Campus series:

Better Be Sure (book one) - four stars - My Review

Purchase Better Have Heart on Amazon.