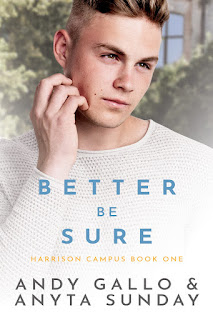 Originally released last year as a solo release from Andy Gallo, Harrison Campus series starter Better Be Sure is being independently self-published by the author, and this time around, he's teamed up with Anyta Sunday. Since I never read the book when it was first out in the market, I can't tell you what, if anything, has been changed, although I confess that I'm now curious since it used to have only Gallo as the author. At the end of the day, though, my review is about the book that I had in my hands, and it turned out to be a rather good read, as well as a wonderfully promising beginning to what looks to be a new series that I'm looking forward to reading more from.

Better Be Sure introduces readers to Jackson Murphy, a Harrison University student who was orphaned four years ago after the devastating loss of his parents. His best friend's parents--who also happened to be best friends with his late parents--became his guardians, taking him when he needed family and a place to call home, later adopting Jack, making him and Marcus Reynolds brothers. Being part of the same fraternity and living in the same room as their fathers means a great deal to both Jack and Marcus, so agreeing to a bet that could cost him and Marcus their room in the frat house was risky. But how hard could it be to find a date to an upcoming dance? The timing seems perfect when he meets Edward Knowles, a worker at a heating and cooling company, part-time student at the community college, and man of Jack's dreams. There is, however, one problem: Ed is very much in the closet.

While I'm more familiar with Anyta Sunday's writing, I'd read (Un)masked about three years ago, so Andy Gallo isn't exactly a new-to-me author. Their writing styles seemed to mesh together well in that book, which is why I didn't hesitate to read this re-released series starter. The bet that Jack agreed to and Ed's refusal to be out were the obvious complications to the romance brewing between them, and to be honest, I wish that Jack had never agreed to the silly bet because of what it could have meant to both him and Marcus should he lose. Sigh. But this is what happens when you're faced with someone you want to take down a notch or ten. I liked the romance between him and Ed, and the supporting cast of characters was commendable. Better Be Sure receives four stars. ♥

Purchase Better Be Sure on Amazon.