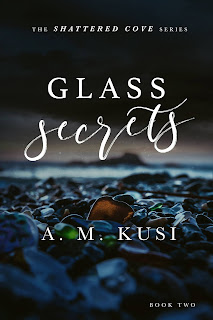 Glass Secrets is the second book in the Shattered Cove series from husband-and-wife writing duo A.M. Kusi. This is the story of two people who would love nothing more than to leave their respective pasts behind, but that's easier said than done. Mia Garcia has found a new place to call home and is looking forward to opening her own business. Everything seems to be just as she hoped it would be, but then she meets her neighbor and there's something about Andre Stone that pushes her buttons in more ways than one. He tests her patience as much as he tests her resolve, because the last thing she needs right now is to become entangled with a man like him. Not that Andre is looking for a distraction, no matter how beautiful said distraction may be. He knows keeping his distance from would be for the best, but when he takes the job as contractor of her yoga studio, the walls around his heart begin to break. But just when Andre thought it was safe to love Mia, long-held secrets threaten their love.

The Shattered Cove series got off to a pretty good start, but this follow-up definitely surpassed my expectations for it. As with its predecessor, this second book brings with it a lot of angst, but the authors have weaved it into the story so that it doesn't feel like drawn-out drama for the sake of drama. It took a while for me to form some sort of connection to both Mia and Andre, although possibly a tad longer for the latter than the former. Once I did, however, I did feel as if I was emotionally invested in their story. These two had their reasons for wanting to leave their pasts behind and simply move forward and not have it haunt them constantly. They came so far and had really commendable growth and development as main characters, allowing me to not just empathize with them, but to truly have a greater understanding of who they are. Mia and Andre's story reminds us that the past doesn't define who you are nor does it determine your future. Nicely done, A.M. Kusi. 4.5 stars for Glass Secrets.

Read my reviews for the Shattered Cove series:

A Fallen Star (book one) - four stars - My Review