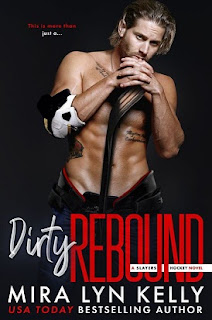 It's never like this for me. Never this driving, irrpressible need to get closer, to havemore. But with Cammy, I can't get enough. I can't get her out of my head and not just in that friendly, fun, Cammy would love this way I think about her most of the time. But in the I'm going to fucking lose my mind if I don't get my hands on her way.

Just when you think this series couldn't get any better, Mira Lyn Kelly releases the next book! There are a slew of hockey romances as well as friends-to-lovers stories out there, but there's something special about Kelly's take on both in the third Slayers Hockey novel. We've got Cammy Wesley, single mom to a seven-year-old son named Matty, and Ruxton Meyers, star hockey player for the Chicago Slayers. Cammy and Rux are the best of friends and have been for the past three or so years, their friendship starting when Cammy's older sister, Julia, began dating Rux's closest male friend and the Slayers team captain, Greg Baxter. FYI, Julia and Greg's story plays out in Dirty Player, book two in the Back to You series, which is the same series where the Slayers Hockey series is spun off of, but both can be read independently of each other.

Cammy Wesley and Rux Meyers would do anything for each other, so when he finds out that a guy she was dating abruptly ended things with her in embarrassing fashion, he decides to avenge her honor by kissing her in front of the douchebag. It's not like anything changes--much--after that kiss. Their friendship isn't the sort that would shift simply because of one innocent--kinda--pressing of lips. And maybe a hint of tongue. But what if that one kiss sparks something akin to curiosity--or maybe something that neither of them even thought possible...like attraction, and a very mutual one at that? But nothing could ever come of it, not when Rux isn't interested in being in any sort of romantic relationship and Cammy doesn't want her son, Matty, to become collateral damage. They're just friends...with a whole lot of extra benefits.


If you've yet to read the blurb for this book, feel free to jump in blind. I kid you not. All you basically need to know is that the main characters are best friends and she's a single mom and he's a hockey player. I loved Cammy and Rux's closeness, and how there wasn't even a hint of anything romantic going on between them. Even that shift from platonic to romantic felt organic, no matter how these two may have tried to kid themselves that they were nothing no more than friends...who happened to be hot for each other...all the time. But see, the thing is, that friendship was there all throughout, even when they started sleeping together, and gah, there was how Rux and Matty had their own special closeness. Oh, and Cammy with Julia and Rux with Greg. Basically, I loved everything about Dirty Rebound. EVERYTHING. Five-plus stars.

Read my reviews for the Slayers Hockey series: