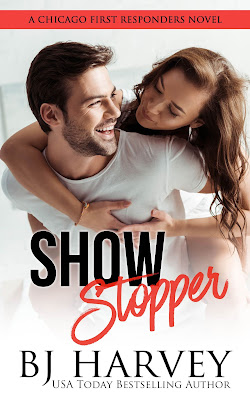 About Show Stopper
The first time they meet it’s by chance. The second is surely a coincidence. The third...it’s either destiny or he’s a stalker.

Renee Hamilton has a thing against men in uniform. In her experience, they play hard, lie harder. Marco Rossi has a thing for feisty brunette women with a backbone and a smart mouth, especially one in particular who's playing hard to get.

She’s fiercely independent and wants better for herself.

He loves helping people so much it’s literally his job.

Lucky for Renee, Marco has a hose, he knows how to use it, and he happens to love putting out all kinds of fires; real or otherwise.

USA Today bestselling author BJ Harvey brings you Show Stopper, book 1 in a new spin-off to the Cook Brothers rom-com series, featuring Chicago first responders fighting the good fight and finding love at the same time. Set in the same world as the Bliss, Game, and Cook Brothers series before it, this title can be read as a complete standalone. 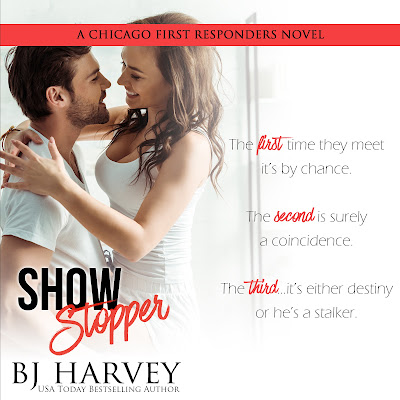 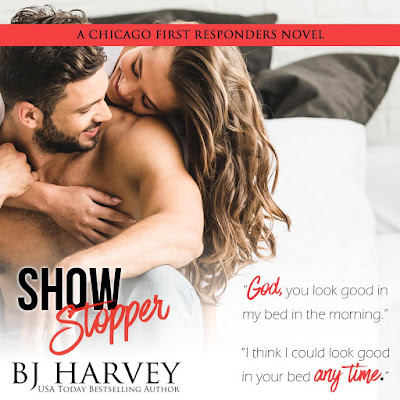 An Excerpt from Show Stopper
Monday
Marco – Hey. How’s your day going? Fallen into the arms of any men lately?
Renee – Good afternoon, Lieutenant. I’ve had no showings today. I’m in the office proofing marketing materials and doing boring admin stuff. Unless I trip over my own feet and my fifty-five-year-old broker John catches me, I don’t think I’ll be needing your rescue services today.
Marco – I wouldn’t rule it out. So, what heels are you wearing?
Renee – Should I take that question as you admitting to a foot fetish?
Marco – Isn’t it a little early in our relationship to be asking about sexual preferences?
Renee – Isn’t it a little presumptuous to be using labels?
Marco – Touché.
Renee – Don’t think I didn’t notice you didn’t answer my question, Lieutenant.

Wednesday
Marco – My sister just told me you’re a closet Brewers fan. Please tell me she’s screwing with me, otherwise it might be the first thing in your con column.
Renee – Brewers . . . they’re a football team, right?
Marco – On my way to a call-out now, but don’t think I’m going to let this one go.
Renee – No, definitely not a Brewers fan. Cubs for life, through and through. I fly the W proudly. Be safe, Lieutenant.
Marco – Always, princess.
Renee – Princess. . . I like it.
Marco – Just say the word and I’ll bow down at your feet willingly.

Thursday
Renee – Lieutenant Rossi, I’ve heard you are a good guy. Do you have further testimonials to support this claim?
Marco – You sure know how to make a long shift go faster. And no, I don’t have a collection of references to hand out to future dates.
Renee – That is a shame. Word-of-mouth is key in my line of work.
Marco – Surely my meddling sister’s confirmation that I’m not a douchebag is proof enough?
Renee – LOL. Skye might just see you as a charity case that needs a woman’s touch.
Marco – I’m trying so hard not to go near that one. I will say that I’m not afraid to put in the work to get a woman’s touch on my own.
Renee – I’ll put that in your pro column then.
Marco – I hope you’ve got a lot of room on that side of the list. You’re going to need it. 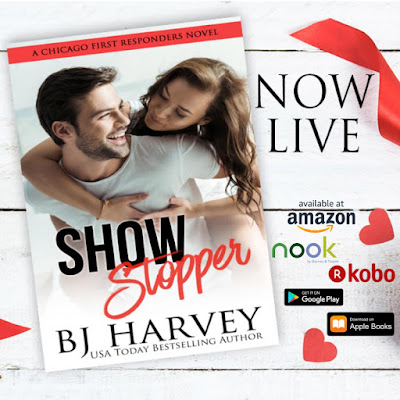 About BJ Harvey
BJ Harvey is the USA Today bestselling author of the Bliss series. She regards herself as a smut peddler, suspense conjurer, and a funny romance thinker upper. An avid music fan, you will always find her singing some hit song badly and loving every minute of it.

She’s a wife, a mom to two beautiful tweenagers, and was born in New Zealand and currently lives in Perth, Australia.