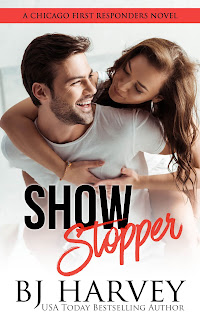 Waaaaah! This new series starter from BJ Harvey lived up to its name because it was, indeed, a show stopper! Chicago First Responders is the new spin-off series from Harvey featuring the very single siblings of Skye Cook nee Rossi (Hard Work, book four in the Cook Brothers series). You can read this independently of the Cook Brothers series, but why would you want to do that when it's such an awesome quintet of romantic comedy reads? So, if you haven't read those books, make sure to add them to your to-be-read list. But yes, if you're new to this author, you can feel free to jump in and start with Show Stopper, which was a delightfully great rom-com.

When thirty-four-year-old realtor Renee Hamilton meets thirty-eight-year-old firefighter Marco Rossi, they fall for into each other...literally! She's attracted to him, and he's smitten with her, but Renee has sworn off men in uniform, particularly those who happen to be in the firefighting profession--and for good reason. But Marco is intent on pursuing her, hoping to show her that he's nothing like her ex. He's waited nearly forty years for his show stopper, and he may have just found her.

From the banter to the chemistry and a memorable cast of characters peppered with a few familiar "faces" and some intriguing new ones, Show Stopper has proven to be the kind of series starter that I love. Renee and Marco have a wonderfully entertaining story to share, and my interest is piqued when it comes to other characters, enough that I'll want to read their stories as the series moves forward. Renee was independent and fiery and Marco was steadfast and caring, and I adored getting to know them and can't wait for more from the Rossis and friends. Five stars!