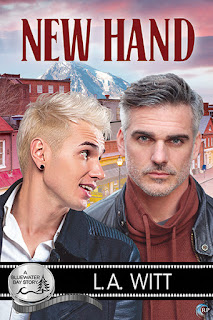 I can still remember when I first read the Bluewater Bay series starter more than three years ago. Starstruck was one of the first books from Riptide Publishing that I had read and reviewed, and now here we are, twenty-three books later, at the end of this multi-authored series. I think it's rather apt that L.A. Witt is the one who closes the series out since it was her story that got the proverbial ball rolling. We may be saying goodbye to the townspeople of Bluewater Bay, Washington and the cast and crew of Wolf's Landing, but we've gotten an array of memorable stories and characters courtesy of talented authors, and it's all ending on a high and appropriately poignant note.

Jesse Connelly was a couple of weeks shy of turning seventeen when he was dealt with a life-changing diagnosis--he was HIV positive, courtesy of the first guy he had ever been with. Ten years later, he is living a good life, has a job at End O' Earth that he loves, and is managing his status quite well. He's also got himself a great support system, courtesy of his close-knit circle of friends. Unfortunately, not everyone hears of his status and remains receptive to his presence in any way, shape, or form, the latest being someone he considered a friend and potential boyfriend material. When he tries to drown his sorrows in a glass of Coke on the Rocks, his attention--and attraction--are immediately snagged by the Alehouse's new bartender and poster child for silver foxes everywhere.

It's been months since forty-two-year-old Garrett Blaine laid his husband to rest, and while he still mourns his loss, Garrett needed to get away from memories of the life they once shared in Seattle. From accountant to bartender, he's trying to find his footing in Bluewater Bay, but he never expected to find himself taken by the young man who sitting at the bar in his first week on the job. Garrett and Jesse have a lot in common--from their love of comics to their being avid gamers--and the more time they spend together, the more the widower falls for the brave guy who's brought such light into his life. But it isn't just Garrett and Jesse who seem to have things in common. There are those who have pointed out how much Jesse reminds them of someone specific--Garrett's late husband, Sean.

New Hand was a heartrending read with bursts of humor interspersed with the romance and sex between Garrett and Jesse, the latter who was introduced in the previous Bluewater Bay novel, Outside the Lines by Anna Zabo. The book shows the journey that the two men take as they deal with the challenges of their new relationship, at the forefront being Jesse's status and Garrett's loss. I liked that these two had to figure out if what they had was for keeps or if it was something that was just filling some void, as if they were making sure that this was worth fighting for and holding on to. We also get check-ins from other familiar couples and characters in the Bluewater Bay series, most of whom were those featured in Witt's contributions, including the one she wrote as Lauren Gallagher. New Hand satisfied the Bluewater Bay fan in me and did this great series proud. This series ender snags five stars. ♥