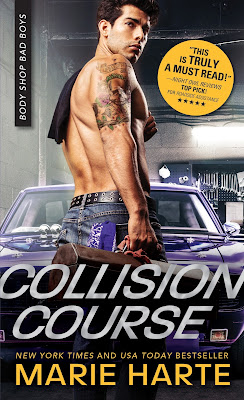 About Collision Course
He's always had a way with the ladies
She won't give him the time of day
Sparks fly when two hearts in motion collide.

Ace mechanic Lou Cortez has always had a way with the ladies, so he can’t understand why lovely florist Josephine “Joey” Reeves won’t give him the time of day.

Joey knows all about mistakes. After getting pregnant at fifteen, she’s spent the past nine years building a life for her and her son. This sexy mechanic is one misstep she’s not going to make. But the more time she spends with Lou, the hotter things get. Soon Joey’s left with a choice: keep things casual, or reveal all to Lou and hope he accepts her–and her son–for who they are.

An Excerpt from Collision Course
Lou wasn’t a one-nighter kind of guy. He liked to wine and dine women, to linger over the seduction and part ways as friends. He always left them wanting more while happy to distance himself.

But with Joey, it was different. He couldn’t understand why, and he’d thought about it a lot. Perhaps her initial rejection had put the spark of challenge in his belly. Or maybe her shyness had intrigued him to see if she’d be that compliant in bed; he had every hope of eventually finding out the answer to that question. Then he’d remember her warm brown eyes, her smile, and he’d get a pang in his chest that had nothing to do with sex and everything to do with feeling.

Christ. If he was already feeling this for a woman he hadn’t yet fucked, he was pretty much screwed. And not in a good way. He had no intention of ever getting married, and Joey seemed like the hearts and—no pun intended—flowers type. Having a steady girlfriend didn’t bother him, but he didn’t feel ready for that either. So why all the lovey bullshit?

Had to come from watching all his friends couple up. They’d turned him soft…so to speak.

He glanced down at himself, aware this constant hard-on when thinking of Joey had to stop.

Heller walked out of his office and glanced around. “I don’t like it this quiet.” To Lou he said, “We go to Ray’s soon, I buy you a beer. You need it. Now quit mooning over whatever woman crawled up your ass and get to work.” Lou caught a few unflattering comments in German he’d heard before just as Heller disappeared back into his office and shut the door. The phone rang, and Lou returned to work. Seconds later, Heller erupted in some harsh German. And man, the big dude had a booming voice that carried, even through a closed door.

The guys who’d been hand sanding a Camry stopped and stared at the office. Mateo and Smith shared a glance then shook their heads.

As one, they turned to Kelly.

Kelly, Heller’s newest hire and a damn fine paint guy, sighed. “Why is it always me? You know predators always go for the weakest prey—and I’m like a hundred pounds less than the boss. At least make Lou ask to give the rest of us a fighting chance.”

Lou chuckled. “Yeah, right. No way in hell am I going in there after hearing that.” He paused. They heard more shouting, then something slammed into the wall with a crack. Dead silence. “You think he’s talking to his old man?” Lou had met the bastard once and had no urge to repeat the experience.

Kelly swallowed. “Um, that’d be my guess. I’ve only been here four months, but no one else gets him that pissy that fast. You know he’s slow to boil.”

“But when he does he’s friggin’ insane,” Mateo added. “No way in hell I’m asking.”

They all looked at each other before Kelly, the group’s sacrificial lamb, said, “We want a vending machine. For drinks. It gets dry in here, you know?”

“Hey, the customers could use it too.”

“What customers?” Lou snorted. “People come in here to drop off their cars. They don’t wait around for you guys to sand and paint. That takes days. Weeks.”

“No shit.” Mateo scowled. “We’re not stupid, Lou. I’ve been asking for one for two years. We’re just saying we want stuff to drink. And a coffee pot would be nice. We’re not lucky enough to walk a few doors down for coffee and donuts like you Webster pussies.”

Lou chuckled, remembering the bear claw. “NCB does serve donuts sometimes. The homemade, old-fashioned kind. But the other day, man, I had the best coffee. And I remember Foley eating some sweet cheese tarts. An apple fritter too, come to think of it.”

The door banging against the wall interrupted the conversation, and they froze.

“Why is no one working?” Heller growled.

Man, the guy was almost worse than Del on a tear. Lou decided to take one for the team and stood. “The guys want a soda machine.”

Heller scowled. “What? Why?”

“They’ve earned it, dealing with your moods.” Probably not the smartest thing he could have said. He swore he could see ice forming in Heller’s eyes—ice that burned. “Think about it. It’s something your old man would never go for. He’d throw a fit before getting his people anything to boost morale.”

Heller opened then closed his mouth, his stare downright frightening as he gazed at Lou before shifting to look at the others. “Ja. Okay. I’ll get one.”

“And a coffee pot or machine. Come on, man. Have a heart. Even I like the idea of a coffee machine. And it would be nice for clients too. Besides, the guys are weak. You know they’re more effective when they’re less whiny and slowly dying off a caffeine high.”

“Okay. Fine. But you.” Heller pointed at Kelly, who flinched. “You’ll figure out the cheapest and best product. Then we’ll see. Come use my computer.”

“Sure, sure. Bury the new guy where no one will find the body, why don’t you,” Kelly said under his breath as he passed Lou and slunk by Heller into the office.

Laughing at the kid’s melodrama, Lou finished doing his estimates before suiting up. Time to disassemble the Corvette so they could start sanding. He glanced at the clock. He’d give it two and a half more hours then bail. And if Heller didn’t like it, too bad. Not that Lou would put it to the guy exactly that way.

Three hours later, Lou swore. He’d gotten so wrapped up in his work that he’d lost track of time. That’s all he needed, to be late again with Joey. He had a feeling if he blew it tonight, he wouldn’t get another chance. 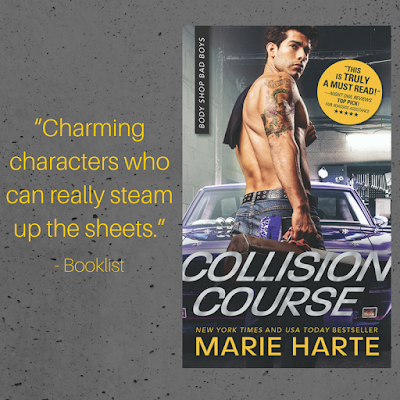