Review: It Must've Been the Mistletoe by L.P. Dover 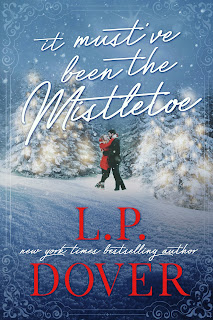 If you've read L.P. Dover's novels in the past, you may be, more or less, familiar with her writing. Well, whatever expectations you may have for her latest standalone release, I suggest you set them aside and go into this one with an open mind. It Must've Been the Mistletoe is markedly different from the titles on her back list, and that's a good thing--not because those older titles weren't good (the ones I've read were!) and not because this new one wasn't up to snuff (it was!). I mean exactly that--it's different and while an author taking a new route may be risky, this one paid off for Dover. It's tamer in terms of intimacy, but the romance is very much there with a dose of holiday magic that fits with the season quite well if you're like me and have chosen to read this in the month of December.

It Must've Been the Mistletoe is the story of thirty-year-old high school history teacher Adeline Hamilton, a woman who thinks finding the person meant for her is as impossible as going back in time. Her best friend does think, however, that her soon-to-be brother-in-law would be perfect for Adeline, going as far as setting them up for her upcoming nuptials. When she's given an unexpected gift, however, one impossibility because a possibility, and Adeline is whisked back in time, about a hundred and fifty years or so. It's there that she meets William Blair, and that's when the other impossibility comes to fruition--Adeline has met the person she's meant for and she's fallen for him. But living in the past is one impossibility that remains. Will William--and their love--find a way to Adeline?

This is a clean romance, in short, there is no sex. I don't have a problem with that per se, although I confess that I was taken aback (though not in a bad way) because all of the other books I've read by L.P. Dover have had sex in it and lots of it. What I did love about this book was its execution and how the author managed to surprise me. Adeline and William were likable characters, though it was clear that who they were in the past and in the present had distinct differences. The pacing of the story was good and the author deserves props for originality. Indeed, this was a refreshing change of pace from a lot of the other books that I've been reading as of late, and I certainly wouldn't mind should L.P. Dover venture yonder again in the future. Four stars go to It Must've Been the Mistletoe. ♥

Purchase It Must've Been the Mistletoe on Amazon | B&N | iBooks | Kobo.