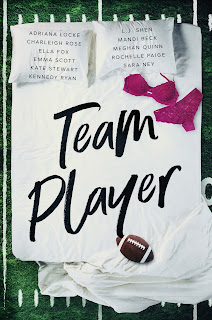 Team Player is an anthology composed of eleven stories written by eleven authors, each one a sports romance and part of them set during the holidays. Out of the eleven stories, I was able to read six, with the remaining five to be read when I don't feel as if my busy Christmas schedule is trying to see how quickly I'll cry "uncle" between December and January. So, this review will be covering the following: Sin Bin by Mandi Beck (ice hockey), Back in the Game by Meghan Quinn (ice hockey), Full Court Press by Kennedy Ryan (basketball), One Good Man by Emma Scott (football aka soccer), The End Zone by L.J. Shen (football), and Cross by Adriana Locke (boxing). While my overall rating for the anthology is 4.5 stars (as based on the six stories), I will be giving each one individual ratings.

Mandi Beck's Sin Bin has a pro hockey player and a college junior on a softball scholarship whose very short time together ends up with her getting pregnant. The ten-year age difference between Jason Dagger and Stella Cruz (he's thirty, she's twenty) gives the story a taboo element of sorts, but what I loved most about this was how Stella was this independent and feisty young woman who didn't demand for anything from Jason. On the other hand, Jason was a bit of a jerk, especially during one particular scene in the book. He did manage to get his head out of his ass, and thankfully so. The sex was hot, but I did wish there was slightly more romance here because Jason and Stella didn't wholly feel like a total HEA match. Four stars. (This is a prequel to Beck's Fulton University Fire series.)

Back in the Game was written by one of my favorite go-to authors, Meghan Quinn, and it's an adorable story about twentysomethings Calder Weiss, a pro hockey player and single father to five-year-old Shea, and Rachel Perry, a kindergarten teacher. From the moment he confidently walks alongside his daughter donning a tiara and fairy wings, I was smitten with Calder. He wasn't just a doting father, but goodness gracious, the man went above and beyond when it came to wooing Rachel. Both Calder and Rachel were a hoot and those text messages they exchanged actually had me snickering. We also get more of Hayden Holmes, Calder's teammate who becomes part of the tripod that is Calder, Rachel, and him. He was introduced in My Best Friend's Ex and was also in Twisted Twosome. We'll see more of him in Quinn's Three Blind Dates. Five-plus stars for this, which is one of my favorites.

Kennedy Ryan moves from the recording studio to the basketball court with Full Court Press and it was a slam dunk of a read. MacKenzie Decker was in his second year in the NBA and Avery Hughes just beginning her career as a sports journalist when they met in his team's locker room. Over the years, their paths would barely intersect, each one leading separate and successful lives. A decade later, they find themselves working together for three weeks. Well, it's not as simple as that with Deck and Avery. There are complications to both their lives, and God, the angst! But how I loved these two and Avery's story in particular brought a tear to my eye. I only discovered Ryan's writing this year, and she's quickly become a go-to author. This story gets five-plus stars, and while he's only mentioned by name, August West story is told next in the full-length standalone hoops romance Long Shot, slated for next year.

I have three Emma Scott titles currently on my TBR list, but One Good Man was my first read from her. It's a football romance, and by football, I mean the sport known as soccer in the US. Set in 1970 and with the Vietnam War hogging the headlines, we meet twenty-year-old college student and aspiring journalist Janelle Martin and med student and semi-pro footballer Adrian Rousseau. Janey is sent to Paris and her hope to report about something with substance goes nowhere when she's assigned to write about Adrian. He may seem like every other jock she met in the US but quickly learns there's more to the story than she first thought. I confess, I wasn't a fan of Janey's in the first few chapters, but she grew on me, and I love what she did for Adrian, who was fab. Five stars.

We get American football in The End Zone. L.J. Shen gave readers a bit of football with an earlier story she wrote for a different anthology, but in her new story, she moves from high school to collegiate level football in this friends-to-lovers tale. Sage Poirier and Jolie Louis were ten when she reached out and gave her hand in friendship and her heart for his keeping. A decade later, they're still best friends and roommates in college, but things are shifting. Whether it takes a well-planned play or a Hail Mary, all that matters is that they don't just score but play to win, and this story was exactly that--a winner. I enjoyed Sage and Jolie's story, and the sex was sizzling. Some transitions from one scene to another felt abrupt or as if something was missing, but this story still gets 4.5 stars.

For such a quick read, Adriana Locke packs quite a punch with Cross, giving readers a second chance romance that isn't the least bit superficial. I liked that we learn of the history between Cross Jacobs and Kallie Welch and how he truly does put in the effort and work to regain her love, trust, and respect. They didn't pretend they weren't still drawn to one another, but I appreciated the hesitation that hung over them. Once bitten, twice shy and all that. Cross does all the other Locke-penned male main characters proud, and had Kallie waited a bit longer, I wouldn't have hesitated to knock her out to get to the guy. That's not to say Kallie wasn't a great gal because she was and kudos to her for putting herself first. This Gibson Boys prequel left me both satisfied and craving for more. 4.5 stars.