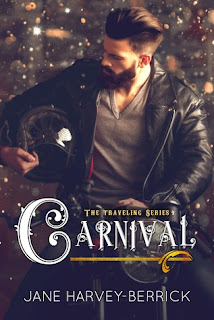 “We're all travelers here, all moving on, and you're not the only one who's running away from something.”

“Yes and no,” I answered truthfully, then took a deep breath, plunging into the cold waters of the past. “I'm 32 years old, and I'm an ex-con.”


What is it with this year and quite a few of my favorite series ending?! Sigh. The latest one is Jane Harvey-Berrick's Traveling series with the release of the fourth and final full-length novel, Carnival, and it's the story of thirty-two-year-old Joseph Colton, better known as Zef to fans and readers of the books. He may have been seeing someone else in two of the three first books, but he's paired with Sara Weiss, an eighteen-year-old runaway who's keeping one particular secret from the man she's crushed on ever since she first spied on him and the rest of the motley crew Zef considers family. The whole gang's here for this fond and heartrending farewell to a well-loved collection.

Zef Colton has tried to leave behind the life that landed him in prison, but his past seems intent on making a point of telling him that his actions have consequences. But the fact that his life from the moment he was released and that his younger brother Daniel is successful as a professional football player and is very much in love, even after they both survived the loss of their parents, is testament that he regrets very little. With his closest friends beginning to settle down, Zef wonders if it's time for him to consider setting down roots of his own. He's not sure, however, if Sara Weiss, a girl with too many secrets--and fourteen years his junior--is the one he should do it with.

I've enjoyed every single one of the author's books that I've read in the past, but I confess that this series about a group of stunt riders who are part of a traveling carnival and are more brothers by choice than friends, is Jane Harvey-Berrick at her best. She's created a setting that is very much in the present but is also autonomous, separated in ways that make it feel like a world unto itself, with its own brand of folks that consider it not just home but part of who they are. What has led each of the main characters in the Traveling series to the carnival is as important as the lives they've lived since becoming part of it all and the lives they now lead with their partners.

Zef is a peripheral character whose back story I've been more than curious about, and color me surprised, because I had no clue that it ties in to one of Harvey-Berrick's standalones, Dangerous to Know and Love, which is about his brother Daniel finding love and managing whatever obstacles are thrown his way. I was also taken aback that Zef was paired up with someone nearly a decade and a half younger than him, but Sara proved to be more than worthy to be the woman in his life--when Zef discovered her hiding within the rig, she was a girl running from something; by the end of the book, she was a young woman on a journey with Zef and her new family by her side.

One of my most favorite things about this series is that the supporting cast of characters do play such vital roles in the story. They don't steal scenes; what they do is push and prod, especially when the main characters of the moment are stubborn or clueless, offer up nuggets of wisdom, and throw out witticisms and humor to balance out the angst and drama. Which is why, when a new couple is under the spotlight, you itch to read more about them--because you've gotten nibbles prior them taking center stage. And I've loved getting to know each one of them, although I confess that I'm still holding out hope that Zach and Luke shall, at the very least, get their own novella.

Harvey-Berrick does herself and those who consider this series a personal favorite proud with her writing in this series ender. She's given Zef the kind of story and happily ever after that his brothers--Daniel, Kestrel, Tucker, Luke, and Zachary--have each found, and she's also tied up any loose ends. She also managed to break my heart at one particular point in the book, making me shed tears even though I had a feeling that things would turn out the way that they did. And again, that one event was a reminder that even in a setting as magical as the carnival, among these band of brothers and travelers, real life happens and goes on. Carnival gets five-plus stars, as does the series. ♥

Read my reviews for the Traveling series:

The Traveling Man (book one) - five-plus stars - My Review