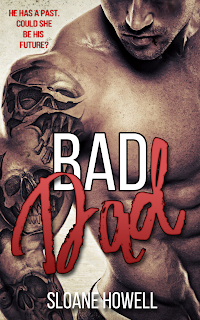 Sloane Howell's Panty Whisperer was not only my first read from the author in May of 2016, but it ended up being one of my favorite reads for the year. Over the past year and a half since then, I feel like I know what to expect from Howell's writing. His latest release, however, was a surprise in the best ways possible. Bad Dad felt nothing like the four other reads by the author--two of which were co-written--that I've encountered since that initial foray. This new standalone was angsty, with a far heavier feel to it and a nicely balanced mix of drama, romance, sex, and action plus just enough humor to not make it feel like an overly emotionally taxing read, with fab writing to boot!

I hesitate to give much in terms of details because when I did start reading the book, I totally blanked out as to what the blurb I had read on Goodreads was. In hindsight, it wouldn't really have mattered had I remembered or not because I wasn't expecting the story that unfolded before. This was above and beyond what I thought I was going to be perusing, and Landon Lane became, hands down, one of the most memorable male main characters I've come across this year. He is the "dad" in the title Bad Dad, a single father to his seven-year-old son, Logan. He's cautious and wary of his surroundings, always on the lookout for anyone getting too close or looking a tad too closely at him and his son. The adjective "bad" doesn't mean he's a terrible father; what's meant by it is "badass".

I was so absolutely taken by this story of a father who would do anything and everything for the son who was his life, who was also a man who realized he was worthy to have a woman who loved him and his son unconditionally. That woman, of course, was Cora Chapman, teacher to the adorable Logan. I thought she was such a kickass heroine. Yep, he was the badass to her kickass, and they simply seemed to click from the moment she noticed him in his hoodie and how he was totally looked into her. Aside from having a fantastic and original story plus two enigmatic main characters, this book also had a splendid cast of characters that pushed the story forward without trying to steal the spotlight from either Landon or Cora. I love when an author manages to surprise the heck out of me, and that's what Sloane Howell did with Bad Dad. This five-plus-starred read is the author at his absolute best. ♥