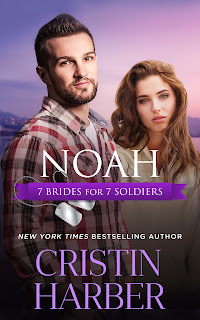 I make no secret of the fact that I love reading Cristin Harber's books because she's gotten the whole romance and suspense balance down pat, and it's something that she's brought to her contribution to the multi-authored 7 Brides for 7 Soldiers series. Noah is the sixth novel in the collection and it's about Noah Coleman, a former Navy SEAL who was prepared to re-up when he got a call from his cousin Lainey--the very same cousin who was more of a sister and was one of his best friends. Her revelation that she was dying of stage four cancer and has him as the legal guardian for her five-year-old daughter, Bella, has him returning to their hometown of Eagle's Ridge. He's always been a planner, but there's only so much planning you can do when it comes to suddenly being responsible for the life of a child and trying to maintain a home and re-start a business. Having someone like guidance counselor Teagan Shaw, who just so happens to be the mom of Bella's best friend Will, in his corner is exactly what he needs. Keeping this within the friend zone, however, may prove to be something neither of them really wants...

The death of Bella's mom is already mentioned in the previous book, Jack, because Lainey and Jack used to be in a relationship when they were in high school and remained the closest of friends, but I still felt that loss Noah, Bella, and Teagan were dealing with. This was a slow burn romance of sorts, mainly because Noah and Teagan made the decision to keep things platonic between the two of them after they kissed, but this is what allowed them to form an even stronger connection, one that went beyond being two single parents or simple lust. This being a Cristin Harber-penned read, I was expecting some mystery and suspense and she delivered! We've even got a hint of Titan with Noah reaching out to one of the team members for help. Figuring out who the bad guy was wasn't too difficult, BUT there's far more going on then I originally thought, and it made for an even more exciting read. Bella and Will were this winsome twosome that I absolutely adored and they remind you to never underestimate children. Noah fit in perfectly with the 7 Brides for 7 Soldiers series while remaining very Harber-esque. Five stars. ♥