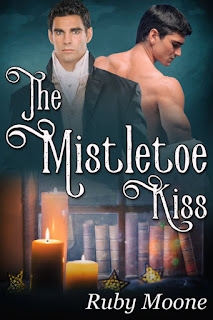 Squee! This! This is my favorite Ruby Moone read so far! I adored this Christmas story, and it felt like so much more substantial a tale than you would think you'd find in a novella. The Mistletoe Kiss is about twenty-two-year-old Christopher Shaw, who found purpose when he started working at the bookshop owned by widower Lawrence Fenton. Christy has always taken note of his employer's good looks, but the man's integrity, generosity, and kindness are what make Mr. Fenton someone worthy of respect...and Christy's affection, secret as that particular feeling may be. After all, how could someone like his thirty-seven-year-old employer even see Christy as anyone more than an employee with one burden too many. From his abusive stepfather to his lack of a proper place to call home, Christy lives for his time with Mr. Fenton. When Christy finds himself in dire straits, Mr. Fenton doesn't hesitate to help. He encourages his young protege to take a more active role in the bookshop. Christy wishes for a time where his mentor would see him as more than some boy barely able to live within his all too meager means. A kiss underneath the mistletoe, however, may become the unexpected gift of a lifetime for these two lonely men.

Le sigh. I absolutely loved this story. Christy and Lawrence were two men who deserved far more love and happiness than they had in their lives. My heart broke for both of them, what with Christy feeling as if his mother constantly choosing to remain in an abusive marriage with her second husband rather than choosing to her own son and with Lawrence having experienced such loss in his own life. The fifteen-year age difference was pronounced at times, especially because there was such an air of innocence that came along with Christy when he was at his most vulnerable, but for the most part, it wasn't as big of an issue as you would expect, which I quite liked. There were also a couple of standout supporting characters, namely Mrs. Anderton, who was a regular customer of the bookshop's, and Christy's mother, who was torn between honoring her marital vows and being the kind of mother that Christy could respect. However, this was essentially about Christy and Lawrence, and their story was one that may have had a fair amount of angst, but don't let that scare you off! This really is a holiday read, one that reminds you that the Christmas season inspires hope and the true meaning of family, and not necessarily just the one you are born into but the one that you create for yourself. Five stars for The Mistletoe Kiss. ♥