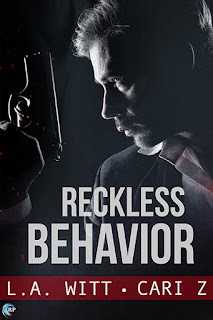 “I love you.” Oh shit. This wasn’t how I’d intended to say it, on the heels of negotiating for his fucking safety. I didn’t know why it had taken me so long to articulate how I felt when it was so easy to feel, when he’d already said it to me, but now . . . now it had the air of a reluctant confession, which wasn’t how I’d meant it at all. I wasn’t telling him because I was worried about tomorrow, but because I had to say it. I had to let something out. My damn body wasn’t strong enough to keep all these emotions locked up, and love was the only one I had worth sharing.

“Yep. Cue carbonite bath. My timing will never be better than this.”


When I first read the synopsis for this third full-length novel in the highly addictive, heart-thumping, and pulse-pounding Bad Behavior romantic suspense series, I was a wee bit worried. Not because I feared authors L.A. Witt and Cari Z would fumble and mangle what had the potential of being the most intense novel in the series so far, but because I was afraid I was going to have to say goodbye to someone close to main characters Andreas Ruffner and Darren Corliss, partners as police detectives and as boyfriends. After all, three of Andreas's four children are abducted right after they have dinner with both Andreas and Darren, and there was nothing subtle nor non-violent about the abductions. I'm not going to disclose if someone actually passed away in this book, but what I will tell you is that I needed tissues at two points. Yep, there were tears, people, and my heart went out to these two men.

Anyone who truly saw them together could never doubt just how committed Andreas and Darren are to one another, whether professionally or personally. After several months together as a couple, Andreas decides it's time to tell all his children not only about his bisexuality and relationship with Darren, but about his HIV status as well. The shock and tension following his announcement wasn't too much of a surprise. His three children being taken and the fourth one getting hurt in the process, however, sends Andreas and Darren scrambling to figure out who has it out for Andreas and what is it they want in return for his kids. Add to that the deteriorating health of Darren's older brother as well as Andreas's still healing injuries and these two have a whole lot more on their plate than they could have ever anticipated. When all is said and done, will they and their loved ones survive unscathed?

From the first chapter onwards, I was on the edge of my seat. A line was crossed when Erin, Casey, Ben, and Emily were put in danger and then three of them were taken, but I also understood why it was done. After all, going after Andreas is one thing. Killing him would be too easy, and Darren was trained to defend himself, but going after those he loved most and who happened to be the most vulnerable? That would hurt Andreas in a way that he may never recover from should he lose any or all of his children. So, that's why my anxiety levels were higher for this Bad Behavior novel compared to the first two. Then there was everything happening to Asher, Darren's brother, and as someone who's had relatives that suffered from either dementia or Alzheimer's, it is a torturous and heartrending journey and the end is inevitable, both providing some semblance of peace and relief as well as pain.

Now, as far as who the villain is in this particular story, well, let me just say that I was at a loss for a good portion of the book. I did manage to figure out who was involved halfway through the story, but for the life of me, I didn't have any motive in mind nor did I know if this person was the mastermind or just some pawn in the whole scheme. For L.A. Witt and Cari Z to have kept my stymied for that long gets this third book double kudos because I do pride myself in usually figuring these things out early on. This hasn't even been released yet, and already it's on my list of top reads for 2017, but then that shouldn't really be a surprise since I loved the first two and they're on the same list. If I get to read the final book before New Year's, keep an eye out for Bad Behavior on my list of top series. Reckless Behavior is total proof that Witt and Z are as dynamic a duo as Andreas and Darren. Five-plus stars. ♥